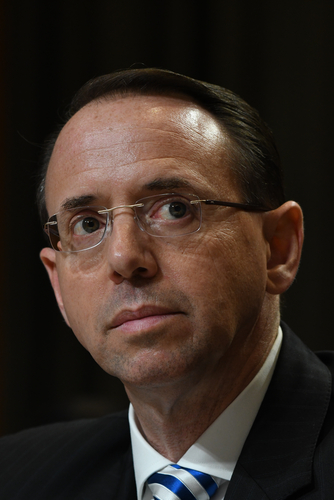 The Wall Street Journal story (sub. req.), based on anonymous sources, notes that Rosenstein is overseeing the special counsel investigation into Russian influence in the U.S. election. The fact that Rosenstein has not recused himself from the oversight role may indicate that he isn’t considered a key witness.

As part of the Russia investigation, Mueller’s team is said to be investigating whether President Donald Trump tried to obstruct justice by firing Comey. The former FBI director has claimed Trump told him he hoped the FBI could let go of the investigation into former National Security Adviser Michael Flynn.

Rosenstein has said he knew Comey would be fired before he wrote the May 9 memo outlining the case against him. Trump reportedly gave Rosenstein his own memo explaining why he wanted to fire Comey the day before in a meeting with the deputy attorney general and Attorney General Jeff Sessions.

Rosenstein told investigators that Trump said in the May 8 meeting that he knew firing Comey wouldn’t end the Russia probe and could create more problems for the president, according to an anonymous source who spoke with the Wall Street Journal.

Rosenstein said the president said he didn’t like Comey and wanted him out, while shrugging off the potential consequences, the anonymous source told the Wall Street Journal.

Next:
Ask Daliah: Opening your law office to open spaces