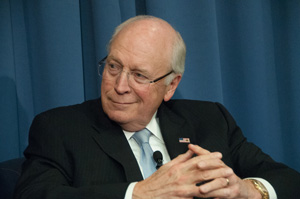 Dick Cheney at the the National Press Club in December 2013.
Image from Albert H. Teich / Shutterstock.com

The Wyoming State Bar is reconsidering its policy of running unedited biographies for meeting speakers amid a controversy spurred by the upcoming appearance of former Vice President Dick Cheney.

The bar used an unedited Cheney bio that criticized President Obama in its registration materials for next week’s annual meeting, report the Associated Press and TPM Livewire.

The biography said Cheney and President Bush left office in 2009. “Shortly thereafter, President Obama began to dismantle the security policies that had kept the nation safe,” the biography said. “His policy decisions have led to a reversal of the gains America made in the war on terror in countries like Iraq and Afghanistan, and a weakening of America across the globe.”

Some lawyers disagreed with the bar’s selection of Cheney as a speaker and to the bio statement criticizing Obama, according to the AP story.

The bar noted the bio controversy in the latest issue of Wyoming Lawyer and apologized to anyone who was offended.

“Certain remarks that appeared in Vice President Cheney’s biography in the annual meeting registration materials have prompted expressions of concern from several members who viewed those comments as inappropriate for a Wyoming State Bar publication,” the magazine said. “In publishing the materials verbatim as submitted by the vice president’s office, the bar was following a long-established practice. However, this incident has provided a valuable learning opportunity, and more care will be taken in exercising editorial discretion in future bar publications. The bar remains committed to the advancement of the legal profession in a non-political, neutral manner.

“The bar apologizes to anyone offended by the publication, and will implement measures to avoid similar situations in the future.”