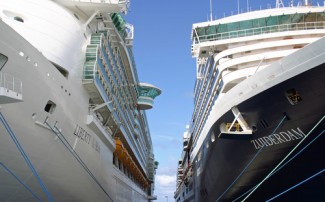 DLA Piper’s partners are meeting in style this month on a chartered cruise ship sailing from Barcelona to Nice.

DLA Piper is the world’s largest law firm, by revenue and lawyers. Its four-night partner excursion will take place on Royal Caribbean’s Liberty of the Seas, the Washingtonian reports in a story noted by Above the Law. “Sure, difficulty finding a big enough hotel may have sparked the idea,” the Washingtonian says. “But there’s also little doubt that the idea of a Mediterranean cruise sounded much more appealing than hunkering down in a Marriott conference room for a weekend.”

Above the Law had another take on the event. “Coming off the Am Law 100 announcement that DLA Piper led the pack in gross revenue,” the blog says, “the partners wanted to take turns yelling ‘I’m King of the World’ from the bow.”

The cruise is intended to foster better relationships and collaborative work opportunities. There will be social events, as well as meetings and focus groups. The cost? The Washingtonian researched peak season, four-night cruises on Royal Caribbean and concluded DLA Piper will have to pay about $3.1 million, not including liquor.