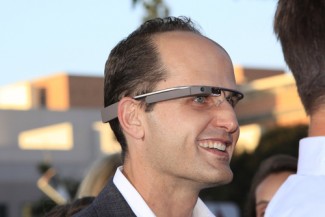 Pulled over Tuesday night on suspicion of speeding by a state highway patrol officer, a California driver wound up with a second, highly unusual, citation.

Cecilia Abadie was also ticketed for wearing Google Glass behind the wheel, allegedly violating a state law against driving while a monitor is visible to the driver. Shocked, she posted a photo of the ticket to her Google+ account and sought input from others about the legality of the citation, according to CNN and the Los Angeles Times’ L.A. Now blog.

Although there isn’t an official record of such Google Glass citations, officials with the California Highway Patrol said Wednesday that the ticket may be a first. It was issued under California Vehicle Code 27602, which prohibits driving a motor vehicle “if a television receiver, a video monitor, or a television or video screen, or any other means of visually displaying a television broadcast or video signal that produces entertainment or business applications is operating and is located in the motor vehicle at a point forward of the back of the driver’s seat, or is operating and the monitor, screen, or display is visible to the driver while driving the motor vehicle.”

The California Department of Motor Vehicles provides a link to the law.

The law was intended to ban television-viewing by drivers, but is broad enough to cover the new Google Glass device, attorney Mitchell Mehdy of San Diego, known as “Mr. Ticket,” told CNN. He also said this is the first such case he has heard of involving a driver ticketed for wearing Google Glass, which is not yet widely available to consumers.

In addition to questioning whether state law prohibits drivers from wearing Google Glass, Abadie also says her device wasn’t turned on. She says the officer who issued the ticket told her its screen was blocking her view.