Drivers are pulled over for driving without an ice cream cone; are the stops unconstitutional? 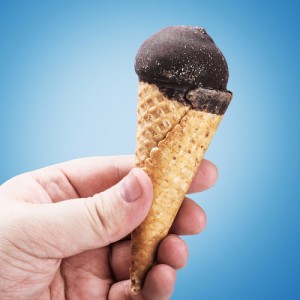 Police in Halifax, Virginia, are trying to improve community relations by stopping drivers and citing them for driving on a hot day without an ice cream cone.

A video of a police officer handing ice cream cones to an unsuspecting driver and her young passenger has gone viral, KTLA and WSET report.

Police Chief Kevin Lands says he hoped the traffic stops would “put some smiles on people’s faces.” But George Washington University law professor Orin Kerr doesn’t appear to be smiling at the thought.

Writing at the at the Volokh Conspiracy, Kerr commends police for trying to help, but his heart isn’t melting at the thought of the well-intentioned police stops.

“Here’s the catch,” Kerr writes. “A lot of these stops are unconstitutional. When the police pull over a car, that’s a Fourth Amendment ‘seizure’ of the driver, any passengers, and everything inside.

“To justify that seizure, the police need at least some cause either that a driver committed a traffic violation or that a person in the car is involved in a crime or wanted in connection with a serious crime. If the police have that cause, they can stop the car regardless of whether they want to write a ticket, investigate a crime or give the driver an ice cream cone. But the police can’t pull over the car without any cause, even if they want to do something nice, such as give the driver a gift.”

The Root: “Cops Pulling Over People to Hand Out Ice Cream Is Dangerous, Not Funny”