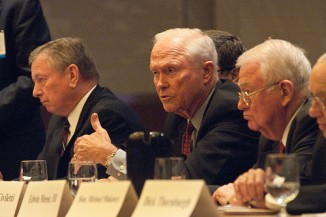 When you put six former U.S. attorneys general together on a panel at a convention of lawyers, it’s pretty safe to assume the meeting room won’t be big enough.

That was the case Friday morning at the ABA Annual Meeting in Chicago, when a Litigation Section program titled “Lessons from History: A Conversation with Former Attorneys General” drew a rapt audience that had people standing at the back of the room and even sitting on the floor in the aisles.

What the audience heard from the six men whose combined service under four different presidents covered much of the past 30 years was not a detailed parsing of fine legal points and constitutional principles. Instead, they focused largely on the inevitable turf battles that play out in dealing with the inner power sanctum of the White House while trying to manage a federal department that includes 93 independent-minded U.S. attorneys posted throughout the country.

At one end of that spectrum, John Ashcroft, who was attorney general under President George W. Bush, said it was important to remember that “the president isn’t above the law, but he is above you.” At the same time, an assistant to Dick Thornburgh, who served under the first President George Bush and Ronald Reagan, refused to take calls from the “White House” unless he knew exactly who was actually on the phone.

At the other end of the spectrum, William P. Barr, who also served in the first Bush administration, warned against the “cult of individual line prosecutors” that must be offset by effective management from the attorney general.

Prompted by questions from Litigation Section Chair Robert L. Rothman of Atlanta, the former AGs had lots to say about issues already bearing down on Eric Holder, the new attorney general under President Barack Obama.

They were generally dubious about a possible Justice Department investigation into tactics used during the administration of President George W. Bush to interrogate suspected terrorists.

Since there is little likelihood that any prosecutions will result, “the better thing is to let the record stand where it stands. The facts already are pretty well-known,” said Benjamin R. Civiletti, attorney general under Jimmy Carter.

Edwin Meese III, who served under Ronald Reagan, said investigating actions by a previous administration would raise serious questions about political motivations. Moreover, he said, prosecuting lawyers for their opinions “is a very dangerous precedent.”

The former AGs generally agreed that the second President Bush’s firing of several U.S. attorneys in 2006 was a politically ill-conceived action.

While the firings were within the president’s power, a lot of actions that are not illegal may seem dumb when done for the wrong reasons, said Meese, “and it seems like this was one of those dumb things.”

But they also emphasized the need for the attorney general to effectively supervise subordinates, especially U.S. attorneys tempted to follow their own agendas. They pointed to the prosecution of former Sen. Ted Stevens of Alaska, which was recently ended by Holder.

“If someone is making political prosecutions, I hope you will interfere,” Ashcroft said. “Sometimes the best decision of all is the decision not to prosecute.”

Michael B. Mukasey, who was attorney general at the end of George W. Bush’s term, downplayed rivalries between the attorney general’s office and the office of legal counsel in the White House, which is technically part of the Justice Department. “It’s a very talented group,” and they stop a whole lot of bad ideas,” he said.

More on the Annual Meeting ‘09 here:

Interactive updates on the Annual Meeting from ABA Media Relations at ABANow.org.