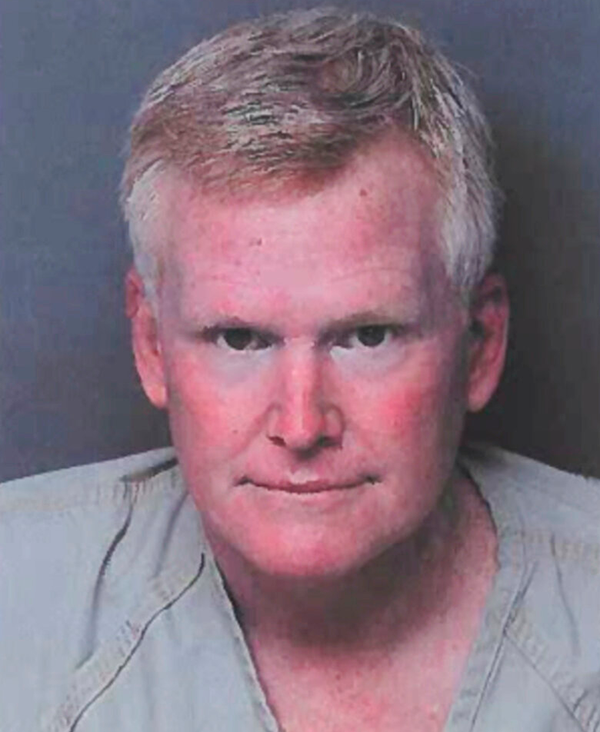 Updated: Police say prominent South Carolina lawyer Alex Murdaugh, under investigation for law firm theft, plotted to have himself killed by a former client, so his son could collect a $10 million life insurance policy.

Murdaugh is facing charges of insurance fraud, conspiracy to commit insurance fraud and filing a false police report, according to a press release by the South Carolina Law Enforcement Division. He turned himself in Thursday.

CNN, the Washington Post, the State and USA Today have coverage.

Murdaugh, 53, survived a Sept. 4 gunshot wound to the head and told police that he was shot by an unknown assailant in a pickup truck. The day before, his law firm had confronted Murdaugh with allegations that he was misappropriating money.

The former client, 61-year-old Curtis Edward Smith of Walterboro, South Carolina, is facing charges that include assisted suicide, according to a Tuesday press release by the South Carolina Law Enforcement Division.

The Herald-Sun, the New York Times, NBC News and the Washington Post had coverage.

A police affidavit says Murdaugh admitted to the assisted suicide plot, while Smith admitted to being present at the shooting. Murdaugh allegedly provided Smith with the gun.

On Sept. 6, Murdaugh released a statement saying he was entering rehab after a long battle made worse by the June 7 shooting deaths of his wife and son, whom he found shot outside their home in Islandton, South Carolina. Another son remains alive.

The slain son had been charged with boating under the influence in a 2019 crash that killed a 19-year-old woman.

On Wednesday, the South Carolina Law Enforcement Division announced that it was opening an investigation into the 2018 death of a Murdaugh family housekeeper, Gloria Satterfield, according to the Washington Post, CNN and USA Today. The agency also said it was investigating the handling of her estate.

The New York Times described Murdaugh as part of a “legal dynasty that has amassed powerful ties in the South Carolina Lowcountry.” Murdaugh’s great-grandfather was the area’s first elected chief prosecutor and the founder of the law firm in which Murdaugh was a partner. Two more generations of the family had the prosecution job through 2006.

One of Murdaugh’s lawyers, Richard Harpootlian, told the Today show on NBC on Wednesday that Murdaugh had nothing to do with killing his wife and son.

Harpootlian said Murdaugh had “massive depression” after trying to stop using opioids that he was taking to get over the deaths of his wife and son. Another lawyer for Murdaugh, Jim Griffin, told the New York Times that Murdaugh primarily bought the drug from Smith.

In addition to assisted suicide, Smith is charged with assault and battery of a high aggravated nature, pointing and presenting a firearm, insurance fraud, conspiracy to commit insurance fraud, distribution of methamphetamine, and possession of marijuana.

Murdaugh had represented Smith in a lawsuit against a forest management company and in a prosecution for driving 10 miles per hour above the speed limit, according to the New York Times.

A press release from the South Carolina Law Enforcement Division announcing the investigation of the housekeeper’s death said the decision was “based upon a request from the Hampton County coroner earlier today, as well as information gathered during the course of our other ongoing investigations involving Alex Murdaugh.”

The county coroner said Satterfield’s death wasn’t reported to the agency, and there was no autopsy. Her cause of death was listed as “natural” on the death certificate, even though her death was said to be from tripping and falling, the coroner said.

Satterfield’s heirs have filed a lawsuit alleging that they never received funds from the settlement of a wrongful death lawsuit in her death, according to USA Today.

Updated Sept. 16 at 2:04 p.m. to report on charges against Murdaugh and the investigation into the housekeeper’s death.