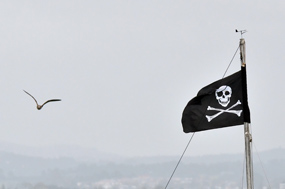 A federal appeals court held Wednesday that an armed attack on a U.S. vessel can be considered piracy even if no one ever boards or robs the ship.

“For decades, the international community has considered violent attacks on the high seas as an act of piracy, and today’s ruling will strengthen our ability to hold those who attack U.S. vessels by force accountable, regardless of whether they are successful or not,” MacBride said.

The U.S. Supreme Court’s 200-year-old definition of piracy has been in dispute in two attacks on Virginia-based Navy ships in April 2010 off the coast of East Africa. The defendants were prosecuted in Norfolk, the first in a series of government prosecutions aimed at slowing the spread of piracy off Africa.

In one of the cases, a lower court judge dismissed piracy charges against five Somalis, saying their attack on the USS Ashland didn’t rise to the definition of piracy because the men had not taken control of or robbed the ship. The 4th Circuit ruling (PDF) sends that case back to the lower court for trial.

In the other case, five Somali men who attacked the USS Nicholas were convicted of piracy for the first time in an American courtroom since 1819. Their convictions and life sentences were affirmed (PDF) by the 4th Circuit’s holding.

Attorneys for the Nicholas defendants said they are considering further appeals.

“Our argument is very simple: You have to steal the boat,” said attorney David W. Bouchard. “That’s piracy and it has been for 200 years.”