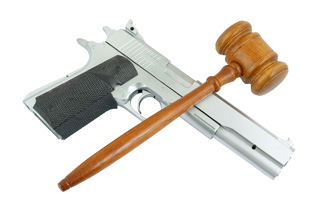 A federal judge in Washington, D.C., has enjoined a gun law in the District that restricts concealed carry permits to those who can show a good reason for carrying firearms.

U.S. District Judge Richard Leon ruled on Tuesday that the plaintiffs had demonstrated a likelihood of success on their Second Amendment claim, report the Washington Post and the New York Times. How Appealing links to the decision (PDF).

The Washington, D.C., gun law says the police chief “may issue” concealed carry permits to those who show “good reason to fear injury to his person or property or has any other proper reason for carrying a pistol.” District regulations interpret “proper reason” to include employment involving the transportation of cash or valuables.

Leon said the District of Columbia’s interest in preventing crime and promoting public safety were compelling interests that could justify the law. But the District failed to show that its “good reason” law achieved those ends better than a more inclusive concealed-carry policy, Leon said.

Washington, D.C., plans to seek a stay of Leon’s injunction while it appeals.

Federal appeals courts have upheld similar restrictions in Maryland, New Jersey and New York, according to the articles. An appeal concerning a similar law in San Diego is pending before the en banc 9th U.S. Circuit Court of Appeals, which is based in San Francisco.