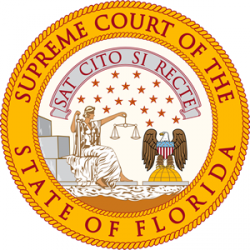 On Thursday, the court issued a short opinion (PDF) adopting the bar association’s proposal for mandatory technology CLEs. The rule change will go into effect Jan. 1, 2017, and it will require lawyers admitted to the Florida Bar to take a minimum of three hours of technology-related CLE courses during a three-year cycle. The court approved the bar association’s proposal to raise the minimum number of CLE hours from 30 to 33 in a three-year cycle to accommodate the new technology requirement.

“After considering the Bar’s petition, we adopt these straightforward amendments as proposed,” a unanimous court stated in a per curiam opinion. The court also noted that the Florida Board of Governors had officially adopted and published the proposed new rules as required under the law, and had “directed interested persons to file their comments directly with the court.” The court, however, pointed out that it did not receive any comments.

In addition to adding the three-hour requirement, the court also amended a comment to its rule on lawyer competence to say that lawyers could retain nonlawyer advisers with “established technological competence in the relevant field.”

The court added that competent representation may also involve cybersecurity and safeguarding confidential information. “In order to maintain the requisite knowledge and skill, a lawyer should engage in continuing study and education, including an understanding of the risks and benefits associated with the use of technology,” the court held.

John M. Stewart, a partner at Rossway Swan Tierney Barry Lacey & Oliver who helped lead the mandatory technology CLE effort, told the ABA Journal that he was thrilled by the court’s action. Stewart first got involved in 2013, when the Florida Bar set up a series of committees and subcommittees to explore reforms to bar association rules. Stewart’s subcommittee was in charge of examining the impact of technology in the law, as well as bringing the state into compliance with the ABA’s 2012 rule change requiring lawyers to demonstrate tech competency.

During the course of his committee’s work, Stewart found himself evolving from tech-skeptic to convert. “Not only did I learn how important it was, I saw the value in what it could do for my practice,” Stewart says. “I guess religion found me rather than the other way around.”

His subcommittee’s main finding was that lawyers needed more education in the areas of technology that impacted their practice. Surprisingly, Stewart says that it was not as tough a sell as he and his subcommittee thought it would be.

“Throughout this entire process, we’ve gotten almost no pushback from lawyers,” says Stewart, who pointed out that the court adopted the rule without holding an oral argument—a move it usually reserves for noncontroversial issues. “I think everyone recognized that lawyers could benefit from more education, both when it comes to technology and in general.” According to Stewart, there are so many hours of free tech CLE’s already available that no Florida lawyer should be impacted, financially, for the foreseeable future.