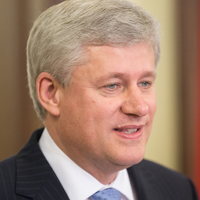 On Monday, the firm announced it had entered into a partnership with Harper’s consulting firm, Harper & Associates Consulting. Harper, who had served as Prime Minister of Canada for more than nine years before his Conservative Party lost power in the 2015 election, resigned from his parliamentary seat in 2016. He was succeeded as Prime Minister by Justin Trudeau of the Liberal Party.

“Dentons is a dynamic, global firm that is uniquely able to help clients create value through its expansive reach and capacity across a range of legal and business services,” Harper said in a press release. “I am excited to announce my strategic affiliation with Dentons, and look forward to helping clients from around the world enter new markets.”

Harper, who is not an attorney, told the Wall Street Journal that combining with Dentons made sense for him, given the global reach of the behemoth firm. “In many parts of the world the lines between business, politics and public communications are not as clear as they are in North America,” Harper told the Wall Street Journal. “For practical reasons, you need to have those local partnerships, and you need to be able to understand who you’re dealing with—and who you should deal with—and how you would do business within that local culture.”

In the press release, Dentons global chair Joe Andrew praised Harper for his “exceptional skills and experience with getting deals done at the critical intersection of business, government and cross-border relations,” adding: “We greatly look forward to working with him.”

Dentons, which is the largest firm by attorney headcount in the world, has attracted politicians from across the ideological spectrum. Harper joins a firm that contains another former Prime Minister, Jean Chrétien of the Liberal Party. Some of Harper’s new colleagues include: Jeff Bleich, former U.S. Ambassador to Australia and special counsel to President Barack Obama; Howard Dean, former governor of Vermont and chair of the Democratic National Committee; Gary Doer, former Canadian ambassador to the United States; Gordon Giffin, former U.S. Ambassador to Canada; Newt Gingrich, former U.S. Speaker of the House and onetime Republican candidate for president; James Moore, former Minister of Industry for Canada; and Bill Owens, a former U.S. congressman from New York. Andrew, the firm’s global chair, is a former chairman of the DNC.