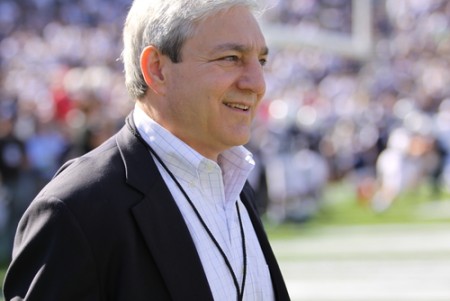 Judge John Boccabella called the case against Spanier, 68, “a Shakespearean tragedy” and questioned why none of the defendants called police, report the New York Times, the Washington Post, the Pittsburgh Post-Gazette and Pennlive.com in stories here and here.

Prosecutors said Sandusky went on to sexually abuse other youths after Spanier failed to tell police about a report that Sandusky had molested a boy in a locker room shower in 2001. After the incident, Spanier and other Penn State officials developed a plan to bar Sandusky from bringing other children to the campus and to inform officials at Sandusky’s charity for at-risk children.

“Why no one made a phone call to the police … is beyond me,” Boccabella said. “Why Mr. Sandusky was allowed to continue to use the Penn State facilities is beyond me.”

Spanier was convicted in March on a misdemeanor child endangerment charge but acquitted of felony endangerment and conspiracy. Spanier’s lawyers had argued their client didn’t realize Sandusky’s interaction with the boy was sexual in nature.

Boccabella sentenced Spanier to four to 12 months’ confinement, with at least two months served in jail and the rest in home confinement. He also ordered Spanier to pay a $7,500 fine.