Fred Thompson, lawyer, former lawmaker and actor on 'Law & Order,' is dead at 73 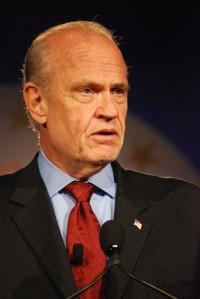 Fred Thompson, who grew up in small-town Tennessee and went on to make his mark as a lawyer, a lawmaker and a film and television actor, died Sunday of a recurrence of lymphoma, his family said. He was 73 years old.

Thompson was known for his commanding presence and folksy manner as he transitioned between national politics (he sought the Republican nomination for president in 2008) and an acting career that made him a household name, reports the Washington Post (reg. req.). Among other noteworthy credits, he was in recent years District Attorney Arthur Branch on Law & Order.

A former U.S. senator from Tennessee, he first became a familiar face in national politics in the 1970s. As the 30-year-old chief counsel to Sen. Howard Baker, he was front and center in portions of the televised Watergate committee hearings that mesmerized the public during the Nixon era.

In his early years, Thompson was an indifferent student and he first married at age 17. However, he found a purpose in life, Thompson told the Boston Globe (sub. req.) in 2007, when he read a book about famed trial attorney Clarence Darrow and realized he wanted to be a lawyer.

“Until I was 17, it never occurred to me I had to be anything, but at 17 I knew I wanted to be a lawyer,” Thompson said.

He earned his law degree at Vanderbilt University in 1967, became a federal prosecutor and began working for Baker as a campaign manager, the Tennessean reports.

After Nixon resigned the presidency, Thompson returned to Nashville and practiced law, representing whistleblower Marie Ragghianti in a case that sparked both a best-selling book and a movie. Thompson played himself in the 1985 film, Marie: A True Story, in a “remarkably adept” performance, the Los Angeles Times (sub. req.) reported when the movie was released.

That led to more acting roles for Thompson, who also appeared in The Hunt for Red October and Die Hard 2, among other major films.

Thompson was introduced to Sen. Howard Baker by another longtime Tennessee Republican, Sen. Lamar Alexander. He said Sunday in a written statement to the Tennessean that “very few people can light up the room the way Fred Thompson did.”

Thompson “used his magic as a lawyer, actor, Watergate counsel, and United States senator to become one of our country’s most principled and effective public servants,” Alexander said. “He was my friend for nearly 50 years. I will miss him greatly.”

Previous:
Man goes on the lam during trial before learning days later that he was acquitted

Next:
Our hamster toy looks nothing like Fox News anchor, says Hasbro in response to lawsuit