In Amazon's 'Gary Busey: Pet Judge,' is what you see really what you get? 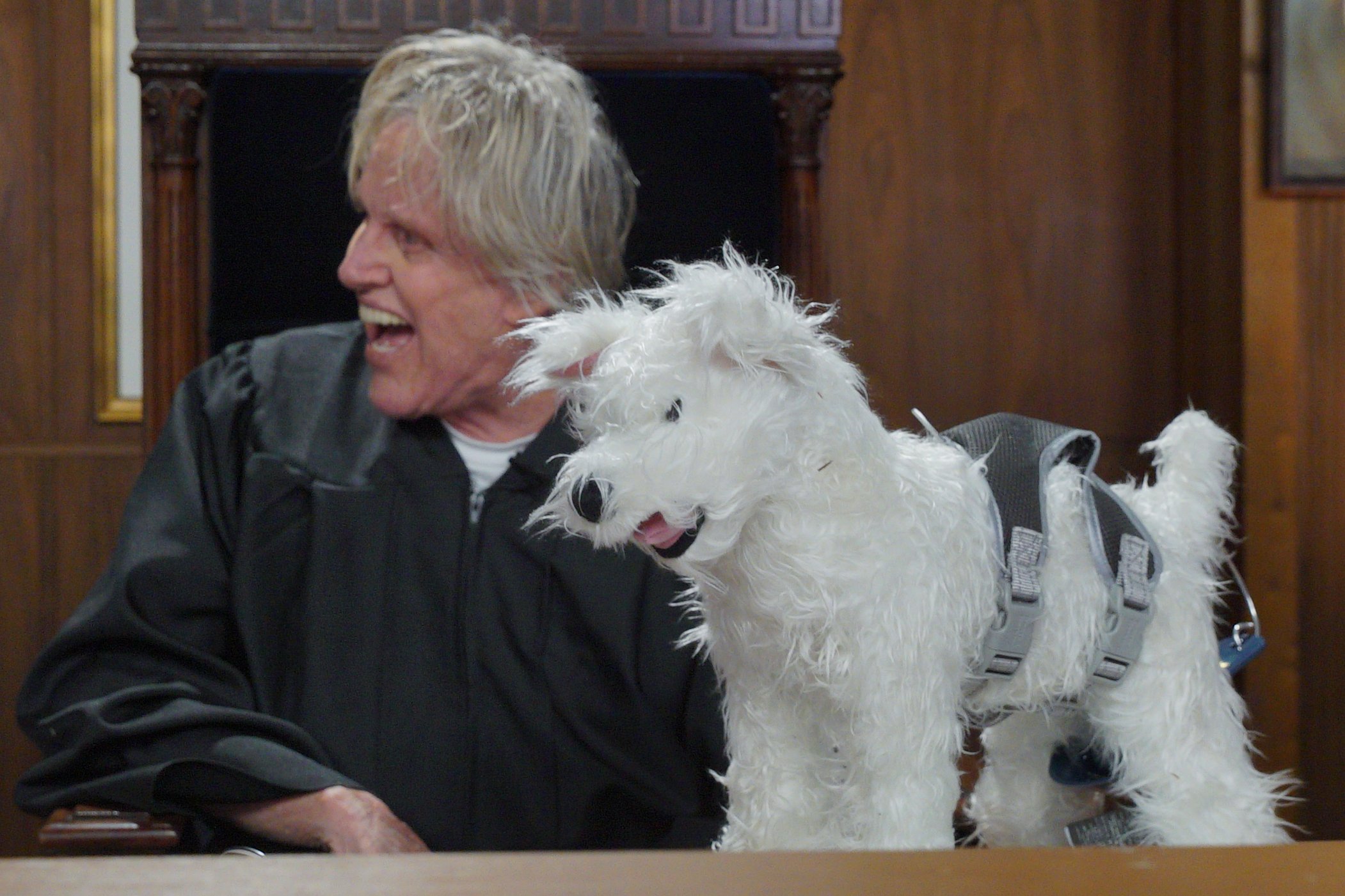 Gary Busey in his role as “pet judge.” Photo by Brenden Wedner.

I’m not a fan of commercials. To be fair, outside of the Super Bowl, you’d probably be hard-pressed to find many folks who enjoy the advertisements that so frequently interrupt our viewing sessions. I completely understand their place and the revenue generation they provide for the networks and streaming platforms that employ them, but I still get annoyed every time one comes across my screen.

As I mentioned, streaming platforms aren’t safe from the scourge. In fact, it seems to me that commercials are often worse on streaming services if for no other reason than their ridiculously repetitive nature. It’s not unusual to see the same commercial multiple times throughout a show. Sometimes you can skip the ad after a few seconds, and sometimes you have no other choice than to watch.

Still, every once and awhile, commercials are helpful. You might come across a product that can fix an issue you never knew existed. For me specifically, though, the most useful commercials are the ones that advertise upcoming series. It’s an easy way to get a quick heads up regarding a new show or series I might be interested in. And that, my faithful readers, is how I was introduced to Gary Busey: Pet Judge.

The series airs on Amazon’s streaming service. The series, released May 25, has six episodes ranging from 23 to 27 minutes.

First and foremost, I was immediately drawn to the show’s lead. Gary Busey, best known for his Academy Award-nominated portrayal of Buddy Holly in the 1978 film The Buddy Holly Story, is still finding ways to keep himself in the public eye despite drug issues and questionable career moves (most of us last saw him in the TV movie The Last Sharknado: It’s About Time). Even more, he’s a native Oklahoman, just like me.

After my initial amazement with Busey himself, though, I immediately latched onto the ridiculous pitch: Gary Busey is now a “judge,” and he is tasked with settling “real” pet disputes initiated by “real” litigants. Honestly, there was no way I could refrain.

The show takes its cues from the long-running series The People’s Court. The theme music is almost identical. The audience is introduced to the litigants in the courtroom in much the same way. Moreover, Gary Busey: Pet Judge also pays homage by showing the litigants interviewed outside of the courtroom as they leave. Moreover, “Judge” Gary does his best to resolve the issues. He comes up with compromises that will right wrongs and make parties whole in his own special way.

However, the Amazon series departs from its predecessor in one essential aspect. 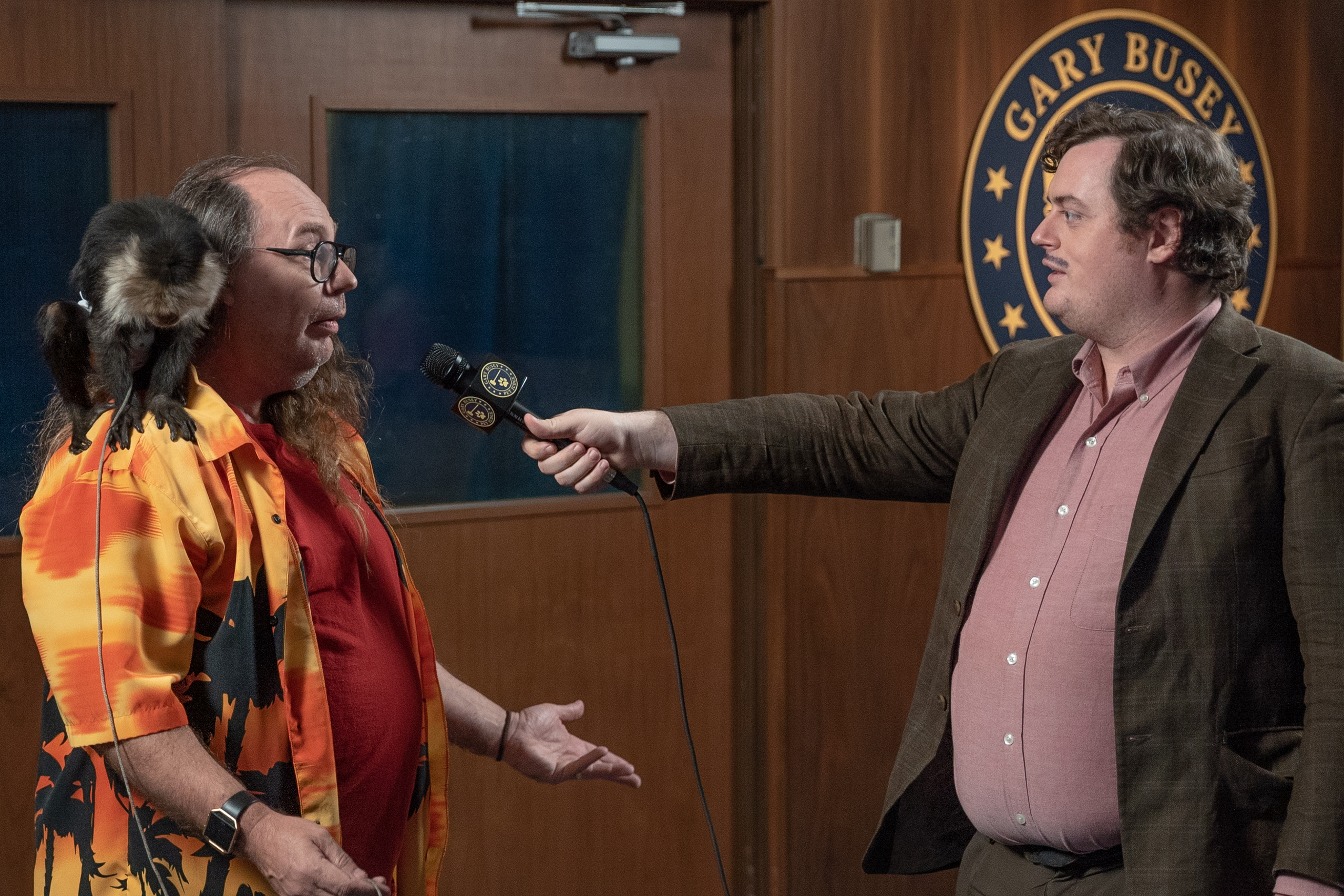 Monkey trainer “Bon” talks with an interviewer after his hearing in the fourth episode. Photo by Brenden Wedner.

‘What you are about to witness is real …’

The first episode of Gary Busey: Pet Judge begins with the following proclamation: “What you are about to witness is real. The participants are litigants with actual pet problems. Both parties of the suit have agreed to dismiss their cases and have their dispute settled here in our court by Gary Busey, pet judge.”

Regardless, I had a difficult time swallowing that hook, line and sinker. I watched the first episode, and it was suspect from the start. The first case involved a married couple arguing over what to do with their deceased cat’s remains. The husband wanted to give the pet a “Viking funeral” by sending him off to sea (in their pond) on a custom-made warship set ablaze. The wife preferred to place the feline in the family pet mausoleum.

The second case was even more outrageous than the first. It involved an older woman who believed her pet dog was actually her late husband reincarnated. She had filed suit against her employer because he would not allow her to add the dog to her employee benefit plan as a qualifying spouse.

After watching the first episode in its entirety, I had my doubts that these were actual lawsuits that had been filed by litigants. Nevertheless, I’ve seen enough crazy in my career to know that nothing is ever so outlandish that it wouldn’t be filed in a court of law. What I didn’t doubt, though, was that these participants were actors. There was no way that your average individual would riff the way these folks did. Still, the series’ website states unequivocally that “it’s real.”

To substantiate my suspicions, I asked my wife to watch an episode with me. She chose episode four, which begins with a dispute by a turtle owner against a pet walker for discrimination. The second case deals with a suit initiated by a plaintiff alleging the animal trainer she hired to provide entertainment for her daughter’s birthday party misled her into believing he would bring the monkey from Friends (one of her daughter’s favorite series).

After watching the episode in its entirety, we both had a few laughs, but we both agreed there was no way these participants were ordinary, everyday litigants. I thought that maybe these are real cases, but they hired actors and improv players to portray the parties to the litigation. After all, there is simply too much cohesive comedic timing to ignore.

And, sure enough, we were right. I watched the end credits and caught the names of all the litigants from the fourth episode. A quick google search showed that each of the four litigants from the two cases are professional actors.

The allure of television court

The People’s Court, on the other hand, made it clear that the litigants appearing on the screen are not actors. That belief made for engaging reality television (albeit in its infancy and early stages). As I’ve remarked before in other columns, humans love drama, and what is more dramatic than real-life disputes with real-life consequences? Sure, the lawsuits may have seemed petty or small to some, but regardless of the damage claimed or the losses sought, television courts showed at least a glimpse of a process many people never experience firsthand.

Most will credit The People’s Court as starting the trend, and it has continued in large part because networks love the format as well. By any measure, this category of entertainment is probably fairly cheap to produce. When you are using actual legal professionals (Judge Joe Brown and Judge Alex Ferrer both had experience as criminal court judges) and actual litigants, you don’t have to hire actors to play the roles. When the series is arbitration-based, you don’t have to hire a writing crew to script any of the scenes. Your set is one courtroom. The overhead is minimal.

That is, until the star’s salary gets out of hand. At her peak, Judy Sheindlin of Judge Judy fame, was making an average annual salary of $47 million per year. Part of that comes with the public persona and ratings necessary to keep a show on air for 25 years. Earlier this year, though, Sheindlin announced that she would be leaving the series to embark on a new television project she referred to as Judy Justice.

Call me crazy, but I doubt it will have anything to do with deciding whether or not insuring a pet dog under a human policy is fraud when the owner believes the animal contains the soul of her departed husband. But, I guess we’ll wait and see.