How can law firms remove barriers to women in the profession?

The discussion comes at a time when the state of diversity in the profession is sobering at best and dismal at worst, according to the panel. 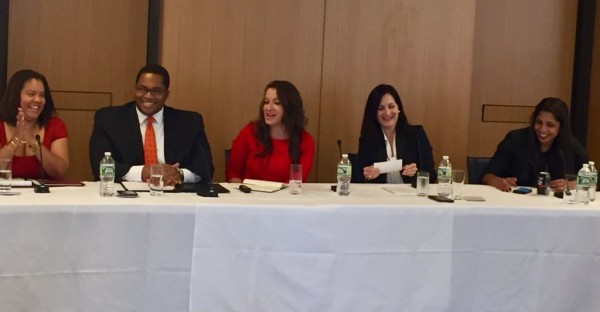 “If we had an equal number of women in leadership roles at the firm, we wouldn’t have this problem,” said panelist and Mayer Brown partner Lisa Ferri. “When women are on compensation committees, there is less disparity in pay.”

A recent survey by Major, Lindsey & Africa found male partners make 44 percent more on average than female partners. And according to a new report by the New York City Bar Association, the number of women first-year associates at large New York law firms has dropped by five percentage points since 2004.

“The biggest challenge …is attrition,” Ferri acknowledged. “Because of that we don’t have a pipeline [to partnership].”

Ferri suggested that attorneys should get credit for the collaborative ways they serve the firm’s clients, and not just for billable hours. She said firms should also find ways to share origination credit. “There has to be an actual change in the firm or things that stand in the way of succeeding,” Ferri added.

“We’re at a point where the next level of change is going to require structural change,” said moderator Arin Reeves, who founded the research and consulting firm Nextions. “How can we mentor women better? How can we sponsor women better?”

Reeves points to her recent research that demonstrates “we don’t need to do anything ‘more’ for women. We need to get out of their way” by removing barriers and challenges.

Gabrielle Lyse Brown, director of diversity and inclusion at the New York City Bar Association, presented data from that organization’s new report (PDF) showing one in four New York firms has no women on its management committee, and one in eight has no women practice group leaders. The report also revealed that of female partners at responding law firms, 85 percent were white, 7 percent were Asian or Pacific Islander, 3.6 percent were black and 2.5 percent were Hispanic.

“Women aren’t monolithic,” Reeves said, noting that women of color face additional hurdles in their advancement. “There are different issues and challenges we face.”

Nate Saint-Victor, an executive director in the legal and compliance division of Morgan Stanley, noted that racial and gender bias is “still widespread” in corporate legal departments as well. Saint-Victor said mentoring women of color has been an effective tool, but he noted that every attorney in the position to do so has an “obligation to pursue a meritocratic environment within your organization.”

“You can’t be who you can’t see,” Saint-Victor noted, explaining that promoting diverse and women partners who “aren’t just tokens” can be an inspiration to associates hoping to move up through a firm.

Adrienne Gonzalez, a lead in the BOLD People & Business Resource Group at Bristol-Myers Squibb, said her company partners with law firms to groom diverse lawyers. According to Gonzalez, Bristol-Myers Squibb has also adapted a business model to reflect the country’s changing landscape and promote inclusiveness internally as well as with its outside counsel.

“What we know is that by 2050, this country will be more than 50 percent African-American, Asian-American and Hispanic,” Gonzalez said. “We have to be responsive to the fact that the country is changing. We can’t keep using the same formula, we need to evolve.”