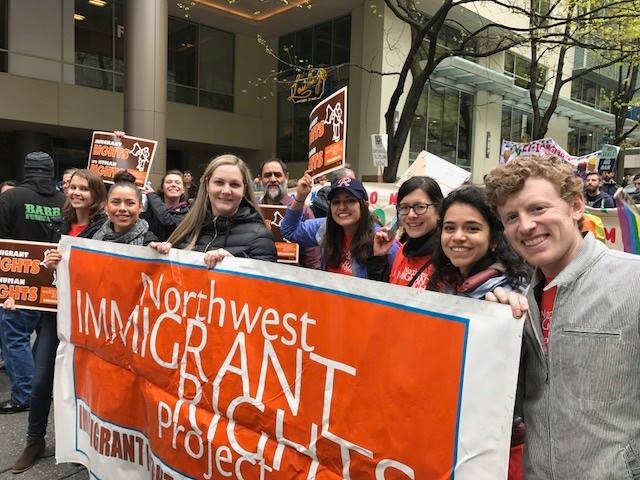 The Department of Justice has lost, at least temporarily, a bid to shut down legal services for immigrants that fall short of full representation, the Seattle Times reported Wednesday.

The ruling came in a lawsuit filed by the Northwest Immigrant Rights Project, a Seattle-based immigration legal services organization. It sued the Justice Department on May 8, as the Associated Press reported at the time, after the department ordered NWIRP to stop helping immigrants in a way that falls short of full representation. That kind of help, DOJ said in the letter, violates a 2008 rule forbidding immigration attorneys from representing clients without first filing the paperwork officially taking on the client.

Judge Richard Jones of the Western District of Washington granted a temporary restraining order to NWIRP, finding that the Justice Department’s position violates NWIRP’s First Amendment rights and harms its work. Jones applied his order to immigrant rights organizations nationwide, defying a request from the government to limit his ruling to just NWIRP.

The 2008 rule under dispute was aimed at fighting fraud by unlicensed attorneys, particularly notario fraud. But the DOJ’s cease-and-desist letter to NWIRP, sent in April, faulted the organization for helping self-represented immigrants prepare motions for their immigration cases without taking them on as clients. This is a common practice among legal services groups who handle immigration, in part because the need for legal assistance in immigration court far outstrips those groups’ capacity. There is no right to a public defender in immigration court because immigration law is civil, not criminal.

According to NWIRP’s complaint (PDF), a local immigration court administrator assured NWIRP after the rule was made that it would be sufficient for NWIRP to notify the court whenever it helped a pro se immigrant prepare paperwork. For nine years after that, the complaint says, no concerns about the practice were raised. But in April, the disciplinary counsel for the immigration court system, which is part of DOJ, told NWIRP that it must file a notice of entry of appearance for each client it represents.

In oral arguments, the judge stressed the nine-year gap between when the rule was made and when the letter arrived, the Seattle Times says. An attorney for the Justice Department said the government took action as soon as it learned of NWIRP’s improper representation. That attorney said NWIRP could still pursue most of its activities, including “know your rights” presentations, but was unable to provide bright-line guidance when pressed by the judge.

NWIRP executive director Jorge Barón told the Times that his organization has actively opposed President Donald Trump’s executive orders on immigration, and is concerned that the cease-and-desist letter “could be retaliation for those activities.”