In Lewis, the Court Stops, Drops and Rolls Over Chicago

Editor’s Note: This is the first in a series of guest posts from Mike Sacks, a law student and blogger at First One @ One First. His goal is to be first in line for politically salient arguments at the high court this term and to report what he sees.

Inside the U.S. Supreme Court this morning, one thing was clear: The city of Chicago got hosed.

A majority of the justices in today’s oral argument in Lewis v. City of Chicago seemed ready to hold in favor of a class of black applicants to the Chicago Fire Department who seek to nullify a qualification test introduced in 1996 that disparately impacted their employment opportunities under Title VII of the Civil Rights Act. After the test results came out, Chicago announced its intention to hire its firefighters from the applicants it deemed “well qualified,” or those who scored over 89 percent on the exam. Problem was, whites comprised the vast majority of the “well qualified” applicants. The black firefighters the city deemed “qualified,” or scoring between 65 percent and 89 percent on the exam, filed their EEOC claim when Chicago made its second round of hirings solely from the “well qualified” group.

Because Chicago conceded in subsequent litigation that the test results did disparately impact the plaintiffs, the sole question before the court today was whether the plaintiff class filed its complaint with the EEOC in a timely fashion. Chicago maintains that the sole discriminatory event took place when the city announced the test results, and that the firefighters failed to file their job discrimination claim within governing Title VII provision’s 300-day limit. The firefighters, meanwhile, contend that the 300-day limit applied to each of Chicago’s subsequent uses of the exam results.

In a surprising turn, three members of the five-justice conservative majorities in Ledbetter and Ricci—between the facts of which Lewis seems a lovechild—seemed to agree with the firefighters’ statutory interpretation. Even so, they spent much of their time this morning making Benna Ruth Solomon, counsel for the cty of Chicago, drink from a fire hose. 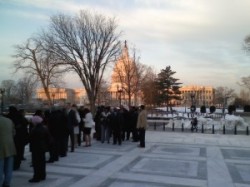 Monday’s line outside the Supreme Court.
Photo by Mike Sacks

Justice Alito’s questions suggested that he still felt the burn from the public’s scorn over his authoring Ledbetter in 2007, his first term on the bench. In Ledbetter, which Congress overturned by passing the Lilly Ledbetter Fair Pay Act of 2009, the court held that a Goodyear Tire plant worker was time-barred from suing for sex discrimination under Title VII even though the statute of limitations had run before she could have possibly known that her company had been systematically paying her less than her male colleagues.

This time, however, Alito showed no sign of Ledbetter’s impractical formalism. Instead, he rejected Solomon’s contention that the black applicants knew they were rejected when the scores were announced, and therefore missed their shot at a remedy:

Someone getting a letter that you sent to people who were qualified didn’t know that [they were rejected]. The only thing that I see that you sent to the people who fell into the qualified category was that it was unlikely, which I take it means less than 50 percent, that they would be called for further processing, but it was possible they would be called for further processing. You didn’t tell them anything about—you didn’t tell them that you were going to fill all of your available positions with people who were classified as well-qualified in that letter, did you?

While Alito showed that he learned his Ledbetter lesson, Chief Justice Roberts seemed determined to limit Ricci’s backdraft. Justice Ginsburg led the charge by asking why Chicago couldn’t have just set the cutoff at 65 percent rather than 89 percent, effectively kicking down the door between the exam’s discriminatory classifications. Then Chief Justice Roberts dumped cold water all over Solomon’s hope that the court would extend its colorblind Ricci approach to Lewis:

Roberts implied that had Chicago only thrown out the exam, the city would be in Ricci territory, where white members of the “well qualified” group could have sued and prevailed for “reverse discrimination.” Of course, Chicago would have lost in that case, too, but at least they’d get to keep the test despite its disparate impact, as New Haven did. Instead, Chicago continued to use the exam and, in doing so, lost the chief justice’s sympathy.

And it was with that term, “use,” that Justice Scalia stopped, dropped, and rolled all over Chicago. Not one to drift into pragmatics as Alito and Roberts had, Scalia let his textualism trump his antagonism to disparate impact laws:

Solomon did all she could to tell the justices that if they only read the provision in the context of the entire statute, they’ll see the case her way. But the justices didn’t seem to be buying it. When John Payton, the firefighters’ counsel and head of NAACP’s Legal Defense Fund, took to the lectern for his rebuttal, he concluded, with the justices’ silent assent, that the firefighters could challenge the discriminatory exam within 300 days of its every use by the City of Chicago.

Contact him at .(JavaScript must be enabled to view this email address).