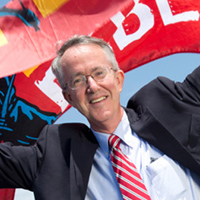 Fred Rooney loved his first job out of law school—but he couldn’t afford to keep it. His salary at Lehigh Valley Legal Services put his family of four under the federal poverty line. So, with a year of practice and a partner who had just finished law school, he started his own firm.

He wouldn’t wish that experience on his worst enemy.

“In law school, you’re taught the theory of law,” said Rooney, who still has a law firm in Bethlehem, Pennsylvania, and is also a Fulbright Specialist doing legal work overseas. “You can go out, hang out a shingle and you may know nothing. And we didn’t.”

Rooney described that experience as part of “How to Build a Successful and Profitable Socially Conscious Law Firm,” a Friday morning panel at the ABA’s Techshow. He and fellow panelist Michael Robak, assistant law librarian and chief technology officer at the University of Missouri at Kansas City, spoke about the value and practicalities of setting up incubators for recent law graduates.

Incubators serve two purposes: they provide guidance and practice basics to new lawyers, and they’re an affordable option for low- or moderate-income people who need legal services. That need is “really beyond critical,” Rooney said. In New York City, he said, 99 percent of parties at state courthouses are unrepresented. In Jackson County, Missouri, Robak added, 70 percent of people who come to his library’s reference desk are pro se—and they’re not necessarily poor.

In 2007, Rooney helped set up the first legal incubator in the nation at the City University of New York Law School. Law schools around the country got interested, and there are 60 around the country today, he said—some of which he helped set up. In 2013, the ABA Journal named him one of their Legal Rebels. As a Fulbright Specialist, Rooney has worked with law schools in the Dominican Republic and Pakistan to set up incubators abroad; he’s hoping to start one in Mexico next.

Robak spoke about technology’s potential to help new lawyers cut costs, allowing them to offer services to moderate-income people. One package he recommends is A2J Author, created by the Center for Computer-Assisted Legal Instruction and the Chicago-Kent College of Law. A2J Author lets nonprogrammers create Web forms that can be turned into legal documents, permitting what Robak calls “selective unbundling” of legal services. Though some attorneys worry that the program could replace them, Robak believes it helps them start cases more efficiently.

Another “low bono” project Robak highlighted is LegalForce, a for-profit legal service company in the San Francisco Bay Area. Run by a nonlawyer “legal concierge” whose job is to guide customers to the right resource, it offers legal books and tablets; computers allowing parties to handle their own simple matters at set prices; cards explaining the basics and costs of common legal matters, and access to on-site attorneys.

Answering a question from the audience, the speakers said moderate-means representation isn’t just about family and criminal law. Depending on geographic area, Rooney said, it could also be immigration, landlord-tenant and consumer debt. Robak added that at a Techshow meeting of law school deans, he was “astounded” by statistics on the unmet need for small business work.

“We have an entrepreneurial legal services clinic at UMKC with income testing,” Robak said. “A lot of people we turn away need that assistance.”