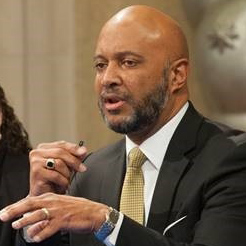 An Indiana lawmaker and three legislative staffers have accused the state’s attorney general, Curtis Hill, of inappropriately touching them at an end-of-the-legislative-session party at a bar in March.

Taft Stettinius & Hollister prepared an eight-page report on the allegations at the request of legislative leaders, according to a Monday story by the Indianapolis Star. The Star did not identify the accusers, but did report that they were all female. The most serious accusation was made by the lawmaker, who said Hill put his hands under her clothes and grabbed her buttocks. The lawmaker says she told Hill to back off and walked away, but he later approached her and once again groped her buttocks under her clothes.

One of the legislative staffers also said Hill groped her buttocks when she tried to remove his hand from her back. A second staffer said Hill put his arm around her waist and hugged her to him, while a third said Hill rubbed her back for about two minutes.

Several of the women said they heard Hill advising women at the bar to “show a little skin” or show more leg for free drinks or faster service.

Hill denied the accusations in an emailed statement to the Star. “At no time was my behavior inappropriate nor did I touch anyone in an inappropriate manner,” he said. He said he was not contacted by any investigator and was not informed who had made the allegations. “Nor have I been provided any due process with regard to these vicious allegations,” he said.

Legislative leaders released a statement saying the investigation has been completed and the matter was addressed with Hill to the satisfaction of the employees involved. A Taft Stettinius & Hollister lawyer had recommended a meeting with Hill and a warning that such conduct wouldn’t be tolerated in the future.

The article says Hill, who was elected in 2016, is a rising star in Republican politics. He is a former county prosecutor and advocate for socially conservative causes who has met with President Donald Trump at the White House on at least four occasions.

The Taft lawyer heading the investigation was Blake Burgan, an employment law expert. His June 18 report said Hill’s alleged conduct toward the employees may have been inappropriate, but it was likely not severe or pervasive enough to result in a hostile work environment. His conduct toward the lawmaker, however, was “likely egregious enough to meet the threshold of ‘severe.’ ”

Burgan concluded there was no hostile work environment, however, because the informal bar party was not officially scheduled or sanctioned by the legislature, and Hill does not work for the General Assembly.