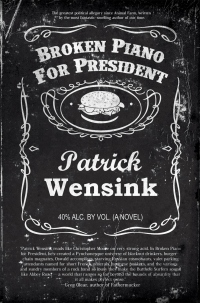 Updated: Lawyers sometimes land in the news for mean-spirited or excessively antagonistic cease-and-desist letters dispatched to individuals who have little clue about intellectual property law.

The letter (JPG) by lawyer Christy Susman was sent to Patrick Wensink, author of the satire Broken Piano for President. The book cover, according to the Atlantic, features “old-timey, straight-from-the-saloon cover art” that bears a striking resemblance to the label for Jack Daniel’s Tennessee Whiskey.

“We are certainly flattered by your affection for the brand,” Susman’s letter says, “but while we can appreciate the pop culture appeal of Jack Daniel’s, we also have to be diligent to ensure that the Jack Daniel’s trademarks are used correctly. Given the brand’s popularity, it will probably come as no surprise that we come across designs like this on a regular basis. What may not be so apparent, however, is that if we allow uses like this one, we run the very real risk that our trademark will be weakened. As a fan of the brand, I’m sure that is not something you intended or would want to see happen. …

“In order to resolve this matter, because you are both a Louisville ‘neighbor’ and a fan of the brand, we simply request that you change the cover design when the book is re-printed. If you would be willing to change the design sooner than that (including on the digital version), we would be willing to contribute a reasonable amount towards the costs of doing so.”

Above the Law noted the letter. “Well, you know what they say,” the blog observes. “You get more flies with Tennessee whiskey than you do with adversarial attorneys.”

Susman is out of town and unavailable for comment, but the chief trademark counsel for Jack Daniel’s Properties Inc., David Gooder, spoke with the ABA Journal. “Our view has always been a nice approach gets things solved faster,” he says.

Gooder and Susman have developed several template letters for dealing with trademark issues that vary with the situation. One type of letter might be used for a fan who copies the trademark, for example, and another for someone who is counterfeiting T-shirts. The letters are then customized based on the particular situation.

Gooder says he and Susman first realized the letter had gotten media attention with a blog post Sunday evening on Mashable. “It kind of kept on rolling,” he says. “It’s amazing, actually. … It’s been a flurry and hard to get work done.” He and Susman have even been contacted by people seeking to do a marketing case study.

Wensink says on his website that despite the polite request, his publisher, Lazy Fascist Press, won’t be taking up the company on its offer. Gooder says Wensink is apparently referring to the offer of money. Gooder’s understanding is that the publisher will revise the cover for future production of the print-on-demand book.

Updated at 12:08 p.m. to include comments from Gooder.