John Grisham on Grappling with Race, the Death Penalty; and Lawyers 'Polluting Their Own Profession' 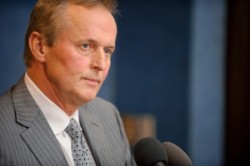 John Grisham isn’t certain what’s happened to the image of lawyers in the five decades since To Kill A Mockingbird was published. But he’s fairly sure that his readers might not want to read about a lawyer who closely resembles the book’s iconic hero, Atticus Finch.

“Here’s the truth,” says Grisham. “There are a lot of small-town lawyers who are honest and hardworking. They do their jobs and serve their community—writing wills, teaching Sunday school, serving in the local legislature. But nobody wants to read about that.”

Grisham, who was awarded the inaugural Harper Lee Prize for Legal Fiction in Washington, D.C., on Thursday, believes that Mockingbird deserves its place in the pantheon of American literature for its graceful narrative alone. The book’s broader issues of race and justice endure, he said, but it’s the voice of that narrative that sets it apart.

“When I first read it many years ago, that’s what I marveled at: Harper Lee’s superb storytelling. It was truly unique. Honestly, what I see in myself is nothing more than a pretty good storyteller.”

Grisham, a former trial lawyer, was being modest. With the 1989 publication of his first novel, A Time To Kill, followed by The Firm shortly thereafter, he managed to launch a writing career that all but invented the literary industry known as the legal thriller. At 56, he has written 25 novels, all but four of them involving lawyers and the law. Nine of his novels have been made into feature films—including an offbeat comedy called Christmas with the Kranks. His latest book, The Litigators is scheduled for publication in October.

Grisham was awarded the Harper Lee Prize for The Confession, his 2010 novel about a small town lawyer’s star-crossed efforts to stop the scheduled execution in Texas of a local football hero convicted of murder. The prize is sponsored by the University of Alabama Law School and the ABA Journal. It will be awarded annually for a book-length work of fiction “that best exemplifies the role of lawyers in society, and their power to effect change.”

In an interview with the ABA Journal, Grisham said he is troubled by the continuing effect that race has on the fundamental fairness of the judicial system. The cynical enforcement of the death penalty portrayed in The Confession is based on several different Texas death penalty cases. But while the problems of racism may have become more nuanced, he says, the problem of unequal justice is fundamentally the same as it was for Tom Robinson, whose fictional Depression-era trial was portrayed in To Kill A Mockingbird.

“Some things have not changed. We see it all the time. It begins with the investigation and the treatment of suspects. A black suspect is simply treated differently from a white suspect,” Grisham says. “Then they are tried in a system populated by white prosecutors and white judges and all-white juries. And that’s not much different from the trial 75 years ago of Tom Robinson.”

“Fortunately, with the use of DNA, we are beginning to recognize that there have been wrongful convictions. We’re finally taking a long look and trying to determine what is wrong.”

Though he has written extensively about the death penalty, including a nonfiction book on an Oklahoma death penalty case, his personal opposition to capital punishment was not instinctive.

“I grew up in a very conservative, Baptist environment. You heard it from the pulpit, in the classroom, around the town that the Vietnam War was a good thing. There were people who protested and burned their draft cards. We hated those people. We knew that America would always be white, and that integration was a bad thing, and that it could be stopped. Likewise, there were certain things—like capital punishment—that were biblical in their origins. That’s how I grew up, and it took quite a while for me to flip.”

Grisham said he finally began to question when researching one of his books. He recalls talking to a death row prison chaplain about the final words of the condemned men he counseled, their last-minute conversions, their final meals and thoughts. They chatted for a while, when the chaplain grew thoughtful.

“He looked at me and asked, ‘Do you think that Jesus would approve of what we do here?’ I thought for a moment and answered, ‘No.’ He said, ‘That’s why this is wrong.’ ”

“I still have moments when I read about a particular ghastly crime, when I believe in [capital punishment], and I struggle with that,” Grisham said. “But then I read about cases of actual innocence, like the [capital case] I wrote about in Oklahoma, where this kid—a white kid—got chewed up by his own hometown.”

“I imagine what the real killer is thinking, when he reads that someone else has been arrested. He even goes to the trial and watches thinking, ‘Boy, these cops are stupid. They’ve got the wrong guy.’ He watches as they bring in the trumped-up confession and a bunch of fake evidence and an expert to back it up, and a jailhouse snitch to testify against him. They’ve got a whole checklist, and they just check it off. And even when they are confronted with absolute evidence, they’re just willing to let him die.”

“That’s what happened in the Oklahoma case,” Grisham says.

Although he acknowledges that lawyers have helped bring about changes in that system, Grisham says they’ve also contributed to the tawdry image of lawyers that has come to dominate the public imagination.

“They’re polluting their own profession. Just watch the TV ads, the lawyers who talk to the press during trials, and the lawyers that are just behaving badly,” Grisham says. In fact, he explores that theme in his forthcoming novel, The Litigators, about two “ambulance chasers” in Chicago who are joined by a younger lawyer who strives to be ethical. Conflict ensues.

But Grisham says he understands the pressures—of finance, of ego—that cause lawyers to take risks or outright liberties with their cases, rather than to play them straight. He says those pressures are shared equally by prosecutors and defense attorneys, and he says it affected some of his own decision-making as a young trial lawyer. Some of the flaws he ascribed to Jake Brigance, the protagonist in A Time To Kill are autobiographical, he allows.

“I was three years out of law school, taking court-appointed cases. They didn’t pay anything, but they helped pay the rent. I was ambitious. I had dreams. I wanted the Big Trial, just like anybody else. You want the big stage.”

“Like Jake, you’re looking for a way to win. It’s all about the winning. You lose focus. And when you lose focus, you end up doing something you shouldn’t do.”