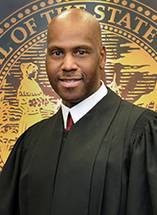 A condominium association is asking a Florida appeals court to kick the judge off its case because he affectionately clasped the hands of the opposing counsel after she approached the bench to speak about an unrelated matter.

The De Soleil South Beach Residential Condominium Association has filed a petition for a writ of prohibition to remove Judge William Thomas from the case, the Daily Business Review reports. Previous coverage has identified the judge as openly gay.

The opposing lawyer is Mary Barzee Flores, a former judge who served on the Miami-Dade circuit court at the same time as Thomas before she left the bench in 2011. She also worked in the federal public defender’s office with Thomas.

The hand clasp occurred at the conclusion of a status conference Jan. 17, according to the condo association petition. After Barzee Flores approached the judge, she placed her hands on the bench in front of him.

“While they were speaking, Judge Thomas took his two hands and clasped former Judge Barzee-Flores’ hands in a highly unusual and intimate sign of affection,” the petition says.

Throughout the conversation, which lasted a few minutes, the hand clasping between Barzee Flores and Thomas led the condo president “to reasonably believe that their relationship was so close and tender that it appeared familial or one based on a lifelong or extremely personal relationship,” the petition says.

Thomas denied a motion to disqualify himself on Feb. 4.

A response to the motion says Barzee Flores had approached Thomas to tell him about her new position as deputy commissioner for consumer affairs for Florida’s agriculture commissioner. She is no longer on the case because of the new job.