Photo of 50 Cent at courthouse with cash stacks in waistband 'not funny,' says bankruptcy judge 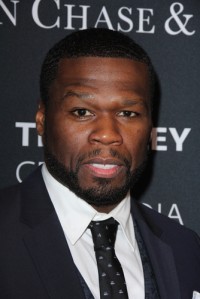 A federal bankruptcy judge was not amused by a photo posted by 50 Cent on Instagram and Twitter last month.

In addition to showing the rapper with three stacks of what seem to be $100 bills stuck in his waistband and holding a yellow bag of candies, the photo apparently was taken in the federal courthouse in Hartford immediately before or after a hearing in his bankruptcy case, according to the New York Daily News. That photo appears to have been removed from Twitter and Instagram, but can be seen in the Daily News article.

The photo was captioned: “For some reason people love me. I went to court today and all I felt was love. They asked me about money I said I ain’t got none, but if you want some m&m’s here ya go.”

“That’s not funny,” Judge Ann Nevins told 50 Cent, whose real name is Curtis Jackson, during a Wednesday hearing. The photo at least came close to violating court rules on electronic devices, the article reports. “You should all have been advised that there are no electronic devices in this courtroom and that has been extended to conference rooms,” Nevins said.

Nonetheless, she refrained from ordering the rapper not to post such photos on his social media accounts, citing his free speech rights, the newspaper reports.

“While you’re in this courthouse, there is nothing funny going on. This is very serious stuff. I would appreciate it very much if we could keep it that way,” the judge urged in a friendly tone.

Last month, after 50 Cent and his lawyers said the cash he used in such photos wasn’t real, he was visited by federal agents pursing a possible counterfeit money investigation, as an earlier New York Daily News article detailed.

Nevins is still mulling a request by the U.S. bankruptcy trustee’s office, made after 50 Cent posted a series of photos including apparent stacks of cash, to appoint an independent examiner to go over the rapper’s claimed income and assets.

ABAJournal.com: “Days after 50 Cent is ordered by bankruptcy judge to explain Instagram cash photos, he posts another”