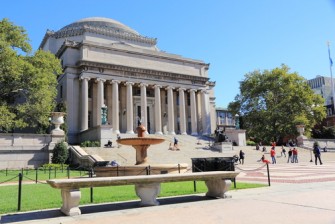 He said the sex was consensual. She said she was the victim of a 2012 dormitory rape, when a consensual encounter changed into a forced sex act as he ignored her repeated “no.”

Columbia University cleared him in a confidential proceeding, as it did in two other complaints brought by students, the New York Times (reg. req.) and Slate reported.

But that was far from the end of it, until a lawsuit came to at least a temporary halt Friday.

Paul Nungesser sued Columbia for alleged gender discrimination under Title IX, after the university OK’d a “Mattress Performance (Carry That Weight)” senior thesis art project in which Emma Sulkowicz publicly toted a 50-pound mattress everywhere she went around campus, including to her 2015 graduation. The protest by the visual arts student of the way Columbia had handled her complaint made national headlines and, although she didn’t name Nungesser, his identity soon became obvious, the Washington Post (sub. req.) reported.

Now a federal judge has nixed the suit, saying in a written opinion that “Nungesser not only fails to plead facts giving rise to a plausible inference that Sulkowicz’s actions were motivated by his gender, he fails to allege harassing conduct that is sexual in nature such that it states a Title IX claim,” the Columbia Daily Spectator reports.

However, Judge Gregory Woods did say Nungesser could replead his complaint in the Manhattan case, according to Newsweek and Reuters.

Nungesser contended the university was complicit in Sulkowicz’ gender-based harassment of him, said his academic experience suffered and that he feared for his safety due to the unwanted attention generated by the art project. After he graduated, he returned to his German homeland to look for work there.

But while enduring the fallout from the art project during his senior year may not have been easy, Title IX was not intended to redress the conduct Nungesser alleged on the part of the university, its president and the professor who oversaw the senior thesis, the judge said.

Title IX “sets a high bar before a private plaintiff may recover and Nungesser has not alleged facts showing that he was effectively deprived of Columbia’s educational opportunities.”

Responding to Friday’s ruling, Columbia said in a written statement that it “brings us closer to the point that this litigation, addressing issues understandably difficult for many, can be concluded,” reports Reuters.

However, there may still be a long road ahead, according to attorney Andrew Miltenberg, who represents Nungesser.

“While we’re disappointed with the judge’s ruling today, we believe that this is a very strong case and we will continue in our pursuit of justice for Mr. Nungesser,” he said in an email to Reuters.

New York Times (reg. req.): “Have We Learned Anything From the Columbia Rape Case?”