The dean of Florida A&M University’s College of Law was dismissed this week after less than 18 months on the job.

Angela Feleccia Epps was replaced on an interim basis by LeRoy Pernell, a FAMU law professor who previously served as the school’s dean, the Tallahassee Democrat reports. Epps did not respond to ABA Journal’s interview request.

“We are taking aggressive steps to improve our bar passage rate and turn things around,” Epps told the newspaper following the February exam results. “Earlier this year, we convened a special group to work on an action plan that includes addressing student learning and preparation for succeeding in law school and passing the Florida bar exam.

Epps was one of four deans recently dismissed by the university. They remain tenured professors, according to a statement by interim provost Rodner Wright. 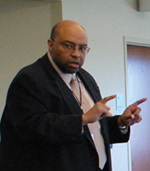 “This week, I will continue to meet with faculty as we review our academic programs. Interim deans are also meeting with stakeholders and students to discuss next steps as the University works to ensure that all academic units are aligned with our strategic priorities,” the statement reads.

Pernell came to FAMU from Northern Illinois University’s College of Law in 2008 and held the position until 2015. The university has credited him with the law school receiving full ABA accreditation in 2009, according to an Orlando Sentinel article.

He also led the law school in 2014, when what appeared to be a brief attrition spike from the 2011-12 academic year led to the American Bar Association’s accrediting board requesting a hearing. Ultimately it was determined that the law school miscalculated its attrition rate, and the hearing was canceled.