In most places around the country, bail hearings are open to the public. The idea is that if the government is going to try to imprison you, the news media and your family and friends should be able to see what goes on and make sure it’s done fairly.

Not so in Dallas County, Texas, where people accused of crimes have their bail set behind closed doors—without any family, lawyers, social workers or journalists present.

A class action lawsuit against the county compelled a district court judge to order the release of video footage of some hearings. After numerous objections, the county issued three days of July bail hearings. The Marshall Project was among those who obtained copies.

In most cases, the encounter between the judge and the accused lasts no more than 15 seconds. A judge ticks off each defendant’s bail amount—often according to a predetermined bail schedule—asks if he or she is a U.S. citizen, and sends them off to jail. There’s no discussion of the person’s likelihood of returning to court or ability to pay the sum, or of the facts of the crime allegedly committed. 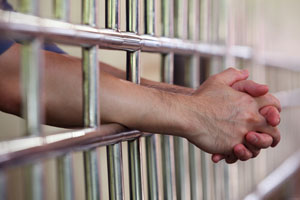 In January, Shannon Daves and five others filed the suit. They are joined by two advocacy organizations, the Texas Organizing Project, which works on electoral organizing, and Faith in Texas, a multiracial interfaith group. The plaintiffs, represented by attorneys from the American Civil Liberties Union of Texas and Civil Rights Corps, a Washington, D.C.-based nonprofit, allege that Dallas County is jailing some of its poorest people without any meaningful inquiry into their ability to pay.

In February, Dallas County started providing arrestees with a brief assessment of their financial resources before declaring a bail amount. The county has not said whether the lawsuit had anything to do with the decision.

The head plaintiff, Daves, was arrested in January for shoplifting and charged with a misdemeanor. Daves, who is 47, unemployed and homeless, was sent to Dallas County Jail, where the magistrate judge set bail at $500. The hearing barely lasted 20 seconds.

Of the roughly 5,000 people who populate the Dallas County jail on any given day, only 23 percent have managed to post bail so far this year.

“Bail hearings feel like calling customer service where the employees have charts with set instructions,” Daves said. “Judges are only concerned with getting you booked into the system. It’s all so impersonal.”

Daves, who is transgender, could not pay. She was sent to 24-hour solitary confinement in the men’s unit of the jail.

Dallas County officials, including both magistrate and elected judges, the assistant district attorney representing the county, and the sheriff’s department, declined requests for comment.

The Dallas County case largely mirrors the ongoing Harris County class action lawsuit in which a federal court judge in April 2017 found the county bail system for people charged with low-level crimes to be unconstitutional. Chief Judge Lee H. Rosenthal of the United States District Court for the Southern District of Texas declared the bail system to be disproportionately affecting the poor, stating that it was an “absolute deprivation of their most basic liberty interests—freedom from incarceration.”

Bail schedules, according to the court, help judges determine the price of bonds for misdemeanors and felonies. “Magistrate judges are told not to deviate from the schedules,” Elizabeth Rossi, the lead attorney from Civil Rights Corps, said. “Those who can pay the amount get out and those who can’t are stuck in jail. Typically arrestees, after spending days or weeks in jail, end up pleading guilty on their first court dates and take sentences of time served so they can get out.”

“Bail hearings feel like calling customer service where the employees have charts with set instructions. Judges are only concerned with getting you booked into the system. It’s all so impersonal.”
Shannon Daves, head plaintiff in class action lawsuit versus Dallas County, Texas.

The Dallas suit alleges that because of the county’s reliance on bail schedules “arrestees do not get any meaningful opportunity to challenge bail amounts for days or weeks depending on their charge.”

Prior to facing magistrate judges, arrestees were not offered financial affidavits to fill out, investigators from the Civil Rights Corps found. These documents are crucial in helping judges decide what bail a defendant can afford. Most of the plaintiffs in the lawsuit are homeless.

Since the suit was filed, recent arrestees say they have been given financial affidavits to fill out, but they were still given bail amounts beyond their means.

“Arrestees in Harris County were not being asked about their indigency status and people with mental health were not being given due consideration,” said Brianna Brown, deputy director of the Texas Organizing Project. “That really kicked started the conversation around how do we challenge the system.”

In a January email to Brittany White, a Faith in Texas organizer, the sheriff’s office said that “due to logistics and security concerns” they could not open up the hearings.

“When the community or a person’s family is able to be present with them at their hearings, they’re not just seen as another arrestee but actually as a person,” White said.