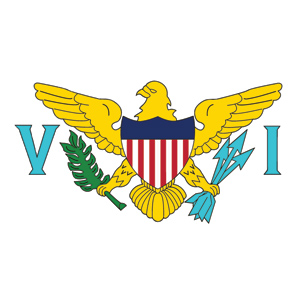 Image of the U.S. Virgin Islands flag from Shutterstock.

In the opinion (PDF), the Virgin Islands Supreme Court described the matter as a case of first impression in which the facts are largely undisputed. It relied largely on the interpretation of statutory language, which says appointments to indigent criminal cases shall be made from “a panel of private attorneys.”

The court agreed with the plaintiffs, Justin Holcombe and Robert King, that such a panel cannot logically include all members of the Virgin Islands Bar.

“The word ‘panel,’ by its very nature, contemplates a smaller subset of a larger group,” wrote Chief Justice Rhys Hodge, in the high court’s opinion.

Hodge added: “We are confident that, going forward, the Virgin Islands will join virtually every other United States jurisdiction in permitting the indigent defense function to be performed by qualified volunteers, whether they be attorneys employed by the Office of the Territorial Public Defender or private attorneys who have willingly joined a panel.”

The court vacated the appointments appealed by the two plaintiffs and ordered the Superior Court to devise, by March 1, an appointment system in a fashion that members of the bar “are not systematically conscripted to provide indigent defense in violation of Virgin Islands statutory law.”

The opinion points to an amicus brief (PDF) filed by the Virgin Islands Bar Association for guidance on matters to consider, including:

• the minimum experience necessary, if any, for those joining the panel
• whether to have a single panel or tiered panels based on the seriousness of the offense
• the pay rate for those who voluntarily accept appointments
• how to proceed if too few lawyers join the panel.

In a footnote, the Supreme Court notes that the U.S. territory of Guam, which has fewer attorneys, has succeeded in operating a panel of voluntary lawyers.