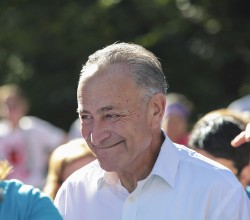 Sens. Chuck Schumer of New York and Bob Casey of Pennsylvania say they will introduce a bill in mid-November, after Congress’ midterm election break.

Their effort comes just three days after a lengthy AP report on dozens of suspected war criminals receiving such payments.

One example is former Auschwitz guard Jakob Denzinger, who fled the U.S. in 1989 as he was about to be stripped of his U.S. citizenship. He lives in Croatia and receives about $1,500 per month from Social Security—nearly twice the typical Croatian’s take-home pay.

The AP reported that payments have been made through a loophole used by the Justice Department to persuade the Nazi suspects to leave. The DOJ denies this allegation.

The legislative proposal would prohibit federal public benefits to anyone who participated in the Nazis’ persecution of Jews and others during World War II. Cutting the payments would require an order by an immigration judge.

Rep. Carolyn Maloney, D-N.Y., says she will introduce similar legislation in the House.