Letters of the Law: National Security Letters Help the FBI Stamp Out Terrorism But Some Disapprove 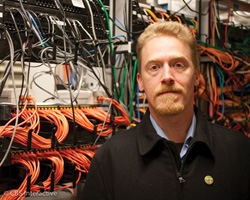 Nicholas Merrill, who challenged an FBI demand
for private records about his Internet company’s
clients, is now working on creating a surveillance-
resistant ISP. Photo by Sarah Tew/CNET.

When Nicholas Merrill answered the door at Calyx, his Manhattan Internet company in February 2004, he encountered an FBI agent, who pulled a letter from his coat.

Merrill, who opened Calyx in 1994, is a techie, not a lawyer. But two items in the letter struck him as questionable. The first was a warning not to disclose the letter or its content to anyone. The second was the lack of a judge’s signature. “It seemed to be acting like a search warrant, but it wasn’t a search warrant signed by a judge,” he told the Washington Post in 2010.

“I know the Constitution,” Merrill told Democracy Now. “The government needs to prove probable cause and go to a judge in order to search.”

In Merrill’s hand was a national security letter, a subpoena issued by the FBI for terrorism and espionage investigations. As he noted, NSLs differ from search warrants. Search warrants require a magistrate to find probable cause. To order an NSL, an FBI special agent or senior official must simply draft a letter certifying that the targeted information pertains to clandestine intelligence activities or international terrorism.