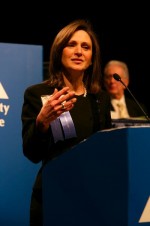 “I remember watching To Kill a Mockingbird for the first time,” Carolyn B. Lamm, a partner at White & Case in Washington, D.C. who became the ABA president-elect nominee this weekend, told the ABA House of Delegates this afternoon.

“I remember longing to stand beside [Atticus Fitch], to stand for what he stood for, and to fight the good fight.”

Lamm said increasing the number of ABA members—now in excess of 400,000—would be a priority during her tenure as its head. “That only 6 percent of solo and small-firm practitioners are members of the ABA is unacceptable. The fact that young lawyers account for only about a third of our membership is unacceptable,” she said.

Lamm’s selection by the Nominating Committee during the ABA Midyear Meeting in Los Angeles virtually assures that she will be formally elected by the ABA House of Delegates in August when it meets during the association’s annual meeting in New York City. Lamm will serve as president-elect starting at the end of the annual meeting, then will automatically become president for a one-year term starting in August 2009.