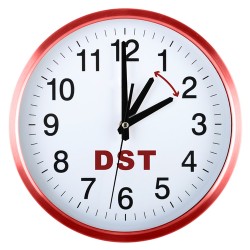 Robberies that take place during the evening commute could be reduced by making daylight saving time permanent, according to a new study.

When daylight saving time begins in the spring, robbery rates drop an average of 7 percent for the entire day and an average of 27 percent during the evening hour that gained extra sunlight, the study found. The Washington Post has a story on the findings by researchers at the Brookings Institution and Cornell University.

According to the researchers, most street crime occurs from 5 p.m. to 8 p.m., a time when many people are traveling home from work. With more light during those hours, potential victims can see potential threats and identify criminals who target them.

Study authors Jennifer Doleac and Nicholas Sanders came to their conclusion after studying what happened when Congress increased daylight savings time by four weeks in 2007. “This produced a useful natural experiment for our paper, which helped us isolate the effect of daylight from other seasonal factors that might affect crime,” Doleac and Sanders write at Brookings Now.

Their paper will be published in the Review of Economics and Statistics.