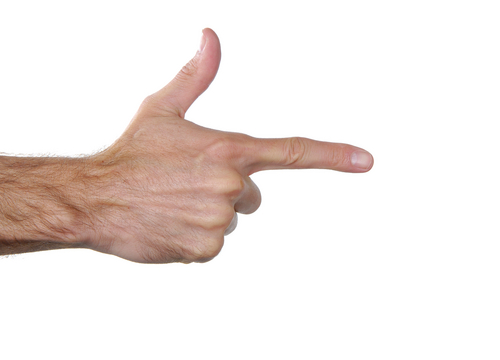 A Pennsylvania appeals court has upheld a disorderly conduct conviction for a man who made a gunlike hand gesture at a neighbor.

The Pennsylvania Superior Court ruled Aug. 27 that Stephen Kirchner’s gesture constituted a crime because of the unique circumstances of the case. Pennlive.com, the Washington Post and the Pittsburgh Post-Gazette have coverage. How Appealing links to the opinion.

Kirchner, a Lancaster resident, was fined $100 for the June 2018 incident that was captured on a security camera. The neighbor, Josh Klingseisen, had installed six of the cameras at his home because of ongoing confrontations between him and Kirchner’s girlfriend. The girlfriend had a no-contact order against Klingseisen.

Kirchner was walking with his girlfriend in an alley behind Klingseisen’s yard to get to the girlfriend’s home when Kirchner made his hand gesture imitating the firing and recoiling of a gun. Klingseisen was spreading mulch in his yard at the time.

Klingseisen testified that he felt extremely threatened by the gesture. Another neighbor who saw Kirchner’s hand motion said she felt insecure and called 911.

Kirchner testified he made the gesture after Klingseisen gave him the finger with both hands.

Kirchner was convicted under a Pennsylvania law that says a person is guilty of disorderly conduct “if, with intent to cause public inconvenience, annoyance or alarm, or recklessly creating a risk thereof, [the person] … creates a hazardous or physically offensive condition by any act which serves no legitimate purpose of the actor.”

Kirchner argued that his hand gesture did not create a hazardous or physically offensive condition. The appeals court disagreed.

“We conclude that there was sufficient evidence that Kirchner’s act of mimicking his shooting Klingseisen created a hazardous condition as it risked an altercation,” the court said.

Kirchner also argued he lacked an intent to cause “public inconvenience, annoyance or alarm,” as required by the statute. The appeals court countered that Kirchner was convicted of only a summary offense under the statute, which required a lesser showing of only recklessness.

Kirchner’s intent to send a message to Klingseisen satisfied the statutory requirement, the court said.

The Washington Post and the Pittsburgh Post-Gazette point out that the Pennsylvania ruling is not the first to consider finger guns. In 2017, a Miami-Dade judge found no First Amendment protection for a person who pointed a finger gun at a police officer and said, “Officer Hernandez, I got you now!”

The defendant, an ex-con, was prosecuted under a law that made it a misdemeanor to threaten officers and judges with death or great bodily harm. The judge noted the defendant and the officer had prior run-ins.