Manafort lawyer was compelled to testify about his statements, unsealed opinion reveals 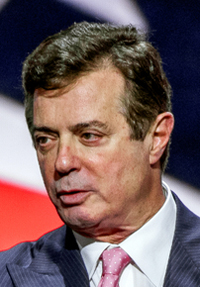 An opinion unsealed on Monday reveals that a federal judge required a lawyer to testify about her work for Paul Manafort and Manafort’s former business associate, Rick Gates.

U.S. District Judge Beryl Howell of Washington, D.C., ruled on Oct. 2 that the lawyer could be compelled to testify to a grand jury under the crime-fraud exception to the attorney-client and work-product privileges. The exception applies when a client uses a lawyer to further a criminal scheme.

The lawyer wasn’t named in the opinion, but she is apparently Melissa Laurenza, a partner at Akin Gump Strauss Hauer & Feld, report the Washington Post, Politico and Law.com (sub. req.). She had refused to testify absent a judicial order.

Manafort and Gates were charged in a 12-count indictment on Monday that includes allegations of a conspiracy to launder money derived from work for a former Ukranian president. The indictment also alleged Manafort and Gates directed a campaign to lobby U.S. officials on behalf of the former government of Ukraine, but did not report their work as required by law.

The indictment said Manafort and Gates had provided false information to lawyers, accountants and bookkeepers. Manafort was Trump’s campaign chairman for three months in 2016 before he was forced to resign.

Howell said in her opinion that prosecutors working for special counsel Robert Mueller wanted to ask the lawyer whether her clients were the source of alleged misstatements about their lobbying work that she provided to the government on their behalf.

Manafort and Gates have pleaded not guilty to the charges. Manafort’s laywer, Kevin Downing, said the charges were “ridiculous.”

Experts interviewed by the Post and Politico said the special counsel’s office may use the crime-fraud exception to seek other testimony from lawyers.

“The special counsel team is highly intelligent, highly aggressive, and they’re going to pursue legal theories that your average prosecutor will not use,” said Ballard Spahr partner Peter Hardy in an interview with the newspaper. “Will they use the specific theory again? It’s certainly possible.’’