Manhattan DA walks back prosecution policies criticized as too lenient 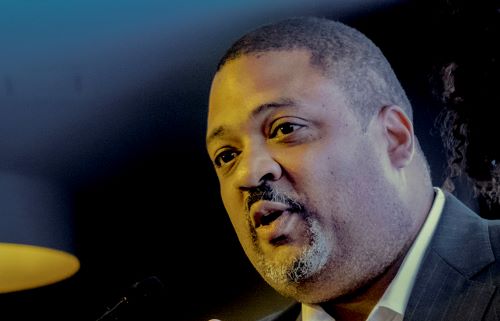 Alvin Bragg speaks to supporters during his campaign for Manhattan district attorney in June 2021. Bragg made clear Friday, Feb. 4, that gunpoint and knifepoint stickups at stores and other commercial places will be prosecuted as felonies, updating a controversial policy memo that he put out days after taking office last month. Photo by Craig Ruttle/The Associated Press.

The initial memo, issued a few days after Bragg took office, had told prosecutors that they should seek jail time only for the most serious offenses, the New York Times reports. The document, which implemented his campaign promises, “prompted weeks of pushback from police officers, small business owners and public officials, making Mr. Bragg a political target,” the article reports.

Since then, Bragg has clarified and modified his new policy, completing “the pivot that he started to make shortly after the backlash began,” according to the New York Times.

The articles outline these revisions:

• The first memo did not say prosecutors should seek jail time for gun possession. Bragg’s new policy says “the default in gun cases is a felony prosecution.”

Bragg also told prosecutors that they were hired for their experience and judgment, and it would be up to them to determine how to charge individual cases.