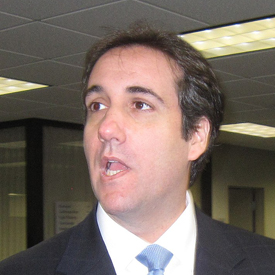 With these revelations, major legal questions are percolating.

How bad is this for the president? “This is a real crime,” said Larry Noble, a former Federal Election Commission lawyer who is now senior director of the nonprofit Campaign Legal Center, according to USA Today. “Since modern campaign-finance laws were passed, no sitting president has been found to be involved personally in a campaign-finance violation.”

In a tweet, Cohen’s attorney, Lanny Davis, was even more pointed when he said, “If those payments were a crime for Michael Cohen, then why wouldn’t they be a crime for Donald Trump?”

Trump’s current personal attorney, Rudy Giuliani, doesn’t see it that way. “There is no allegation of any wrongdoing against the president in the government’s charges against Mr. Cohen,” he said.

The team at Lawfare said Giuliani’s interpretation was not quite right. “Although it might not sound as good for the president, the proper formulation would have been that the Justice Department allowed a defendant to plead guilty to crimes on the basis of factual claims and sworn statements that, if true, potentially implicate Trump as well.”

Legal scholars disagree on whether or not a sitting president can be indicted on federal criminal charges. special counsel Robert Mueller’s office has told the president’s lawyers that they will follow Department of Justice guidance and not indict a sitting president.

However, once the president leaves office, it’s fair game, regardless of jurisdiction.

Will Cohen cooperate? Notably, Cohen’s plea agreement does not include cooperation. However, that doesn’t need to stop him.

Currently free on $500,000 bond and awaiting sentencing, U.S. District Judge William H. Pauley III reminded Cohen that he faces up to 65 years in prison regardless of conversations he had with prosecutors.

The rules are set up to incentivize cooperation. David Kris, a former assistant attorney general for national security, tweeted Rule 35(b)(1) of the Federal Rules of Criminal Procedure, which allows a judge to reduce a sentence within one year of sentencing if the government files a motion saying that the defendant “provided substantial assistance in investigating or prosecuting another person.”

Federal Rule of Criminal Procedure 35(b)(1): “Upon the government’s motion made within one year of sentencing, the court may reduce a sentence if the defendant, after sentencing, provided substantial assistance in investigating or prosecuting another person.”

“Defendants have cooperated after conviction hoping to get a lesser sentence,” said John P. Carlin, a former federal prosecutor who also served as chief of staff for Mueller when he was FBI director, according to the New York Times.

As for Cohen, Adam Davidson at the New Yorker concluded a piece on the plea deal by writing, “Cohen is all but screaming that he has more to share.”

What now? In short, no one knows.

Depending on what Cohen has to say, it could further impact the president and continue to provide leads for Mueller’s Russia Investigation, which began the probe into Cohen before handing the case off to the prosecutors in the Southern District of New York.

The president, who has called the investigation into the 2016 election and his associates a “witch hunt,” is known for counterpunching. In August, he asked Attorney General Jeff Sessions to shut down the special counsel’s probe. He’s also voiced his displeasure at Sessions’ early recusal from the probe. Notably, at a rally in West Virginia hours after Cohen’s court appearance, Trump did not make a comment regarding his former lawyer. Trump made his first public comments about Cohen’s plea in a Wednesday-morning tweet: “If anyone is looking for a good lawyer, I would strongly suggest that you don’t retain the services of Michael Cohen!”

In civil court, Daniels may now be able to depose the president in her lawsuit regarding the nondisclosure agreement that Cohen helped secure, Michael Avenatti, Daniels’ lawyer, said in a tweet. The judge in that case had stayed the proceeding until Cohen’s criminal matter could be resolved.

“The developments of today will permit us to have the stay lifted in the civil case & should also permit us to proceed with an expedited deposition of Trump under oath about what he knew, when he knew it, and what he did about it,” Avenatti tweeted. “We will disclose it all to the public.”