LSAT will be administered on Microsoft Surface Go tablets in 2019 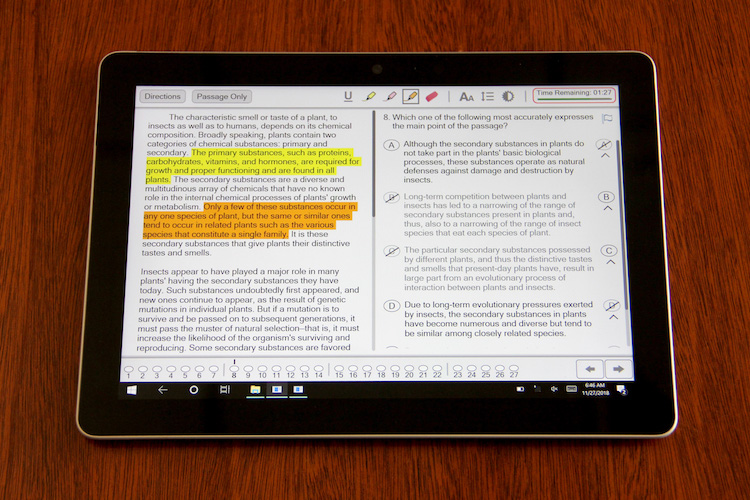 “Now that we have the device, everybody is curious about it. It’s a great one, they’ve engineered it from the ground up, with accessibility features,” says Kellye Testy, president and CEO of the LSAC, which administers the LSAT. According to the release about the development, the tablets will be loaded with custom software for the exam.

Also announced Monday was news about Microsoft working with the LSAC on its platform known as the Admission Communication and Exchange System, which law schools use for student recruiting, admissions and ABA reporting requirements. A new version of ACES will be released next year, and it will include enhanced graphical reporting to help law schools see data trends.

“We wanted to prioritize working with a partner who cares deeply about education and accessibility, who was willing to work with us to help with the affordability of education and deliver something that is really high quality, in a way that helps promote access,” Testy says of Microsoft.

Accessibility also was an issue, says Troy Lowry, senior vice president of technology products and chief information officer at the LSAC. The Surface Go “has a lot of built-in assistive technology, like being able to change the font size, highlighting, contrast and color correction,” he says.

“If you’re blind, text to speech is built into the product, and we also have other options, like JAWS,” Lowry adds, mentioning Microsoft Windows’ screen reader program.

Since June, the LSAC has offered free LSAT test prep with the nonprofit online platform Khan Academy. That gives LSAT takers a sense for interacting with the exam digitally, rather than through pencil and paper, Testy says. And starting Dec. 12, the LSAC website will have a familiarization tool, so people will know what to expect with the digital format.

“We’re working hard to ease anxiety, help open access and make everyone feel comfortable with the process,” she adds.

Regarding test security—some try to collect all the questions on standardized exams and share them with others before they take the test, according to Testy—private Wi-Fi will feed the LSAT questions to the tablets from a hub. The questions within each section will be the same for test takers but given in a different order.

There’s also a change with the exams’ essay writing section, starting with the June 2019 LSAT. At that point, the writing sample with be administered on a secure online platform, and test takers can type their essays where and when they want. Additionally, repeat LSAT takers don’t have to complete the essay each time they take the exam.