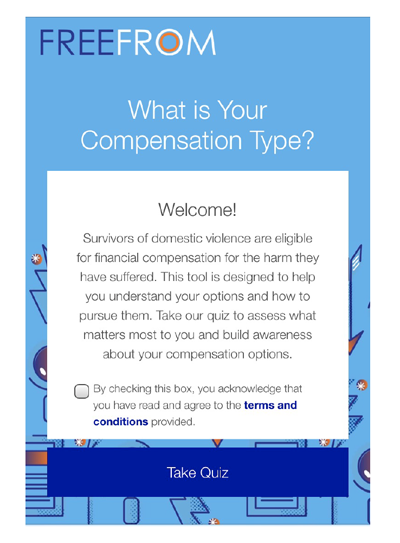 FreeFrom, a California-based nonprofit, has launched a self-help compensation tool for survivors of domestic violence.

“Survivors across the U.S. will be able to seek financial justice and navigate a complicated legal process with ease,” says Kat Manalac, FreeFrom board member and partner at seed accelerator Y Combinator, in a press release. “FreeFrom is transforming a difficult, emotionally-taxing process into one that is accessible and empowering.”

The web-based tool, found at compensation-quiz.freefrom.org, aims to help domestic violence survivors pursue legal compensation options. It currently includes information for California, but intends to expand nationally by the middle of 2018, according to the release.

Once on the site, the user is presented with a series of questions regarding the person’s financial situation and what they are seeking remuneration for. With that information, the website presents the user with compensation options, including civil legal action, criminal restitution and Victims of Crime Act funds.

“Survivors should not have to pay for the medical bills and property damage resulting from them being abused but that is the status quo,” says Amira Samuel, FreeFrom’s compensation program director, in the release.

According to 2015 statistics from the National Coalition Against Domestic Violence and citing a 2004 World Health Organization study, intimate partner violence is expected to cost the U.S. between $5.8 billion and $12.6 billion annually.

On an individual level, a 2009 study in the Health Services Research Journal found that women who experienced physical abuse faced 42 percent higher health care costs than non-abused women. A 2003 study from Georgia found that 38 percent of a sample of 110 survivors of domestic violence had experienced homelessness after leaving an abusive environment.

One in three women and one in four men will be physically abused by an intimate partner, according to the NCADV.