Older teenagers in the state of New York will once again be tried as teenagers rather than adults, under budget legislation passed by the state last weekend.

The New York Times reported that New York was one of only two states in the nation that tried 16-year-olds as adults. Several others try 17-year-olds as adults—but as the ABA Journal reported in February, states are increasingly reconsidering that practice. New York had considered raising the age of adult prosecution in 2016, but ultimately did not.

The new rules will take effect starting Oct. 1, 2018 for 16-year-olds and Oct. 1, 2019 for 17-year-olds. Those teens will be held in juvenile facilities rather than in county jails with adults. Misdemeanor cases will be heard in family court. Felony cases will go to a new “youth part” of the state’s criminal trial courts, where judges trained in family law will handle the cases.

After 30 days, felony cases against 16- and 17-year-olds would automatically be sent to family court unless a prosecutor can prove “extraordinary circumstances”—a phrase the Times says is not defined in the law. Violent felonies could be diverted to adult criminal court if they pass a three-part test on whether a victim sustained significant physical injury; the accused used a weapon; and the perpetrator engaged in criminal sexual conduct.

New Yorkers with juvenile records, but who have committed no new crimes 10 years after their juvenile offenses, will be permitted to apply to seal their convictions.

Though the change was signed into law with some fanfare, legislators disagreed about whether it went far enough. State senator Velmanette Montgomery, a Democrat from Brooklyn, told the Times that some juveniles could still end up in adult jails or prisons, but “at least we have changed the direction.” Another Democrat from Brooklyn, Senator Kevin S. Parker, told the Times the bill was more complicated than it needed to be.

Gov. Andrew Cuomo, also a Democrat, issued a press release noting that teenagers put into the adult criminal justice system have a higher rate of recidivism, higher rates of physical and sexual assault and a higher rate of suicide than teens prosecuted as juveniles. A majority of crimes by teenagers are nonviolent, the release notes; the Times says violent felonies are about 1 percent of juvenile charges in the state each year.

Among those present at the signing of the bill was Akeem Browder, brother of Kalief Browder, whose juvenile criminal case has attracted widespread attention. Kalief Browder was arrested at 16 for stealing a backpack and spent three years at New York City’s Rikers Island prison, much of it in solitary confinement. The case was ultimately dismissed when the victim left the country, but Browder’s time in prison left him with mental health problems. He committed suicide at the age of 22.

“By raising the age of criminal responsibility, this legislation will reduce crime, recidivism and costs to the state, and help us deliver on the New York promise to advance social justice and affirm our core progressive values,” the governor’s release said. 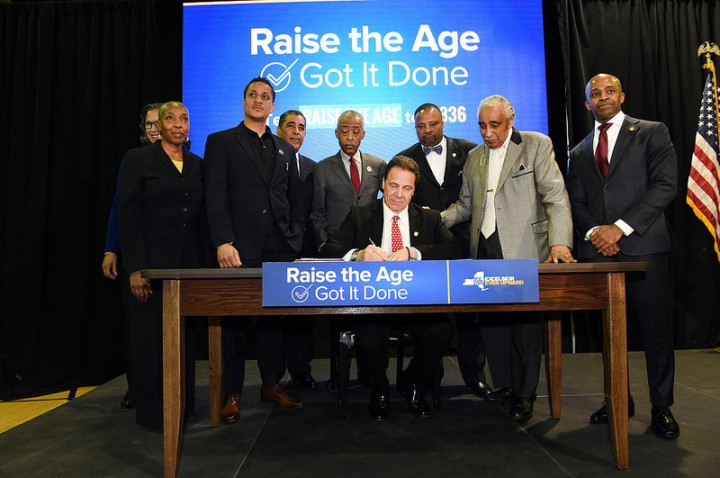