White & Case Partner Nominated to Serve as ABA President in '09 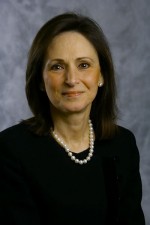 The first official act of the ABA’s new president-elect nominee today was to shake hands with one of the other two candidates in the race.

Then Carolyn B. Lamm, a partner at White & Case in Washington, D.C., who works on international arbitrations, was swept up in the enthusiastic congratulations of supporters who had kept vigil with her outside the executive session of the ABA Nominating Committee. The committee selected Lamm on its first ballot Sunday in a meeting that lasted a little under an hour.

“I feel pretty darned good,” Lamm said. “I’m delighted and blessed with great supporters. It’s something I could not have done on my own.”

Lamm’s selection by the Nominating Committee during the ABA’s Midyear Meeting in Los Angeles virtually assures that she will be formally elected by the ABA House of Delegates in August when it meets during the association’s Annual Meeting in New York City. Lamm will serve as president-elect starting at the end of the Annual Meeting, then will automatically become president for a one-year term starting in August 2009.

The other candidates were James R. Silkenat, a partner at Arent Fox in New York City who manages the firm’s international business practice, and Paul T. Moxley, who handles securities and commercial cases as a partner at Parsons Kinghorn Harris in Salt Lake City.

This year’s contested ABA presidential race was not unusual, although more candidates now run unopposed than in the past. Contested races usually involve two candidates, so this year’s three-person race is somewhat rare, although not unprecedented.

The selection process next year is expected to be more typical of recent history. Stephen N. Zack, a partner at Boies Schiller & Flexner in Miami who served as chair of the ABA House of Delegates in 2004-06, has filed notice with the Nominating Committee of his candidacy. The filing deadline is March 1, but no additional candidates are expected.

Of course, a “contested” race means something quite different in the ABA than it does in the rough-and-tumble of U.S. electoral politics. ABA candidates conduct themselves with a decorum and civility not often seen in public races for political office, and most politicking, such as it is, occurs on the organized bar circuit of meetings, receptions and dinners at meetings of the ABA. It helps that the voting constituency is confined to the ABA leadership ranks.

When there is a contested race, the Nominating Committee meets in executive session at the midyear meeting and continues holding ballots until one candidate receives the majority required by the ABA Constitution—34 of the committee’s 67 members. The committee is made up of 51 members from the states and the District of Columbia, seven delegates selected by sections on a rotating basis, one member each from the Judicial Division and the Young Lawyers Division, three at-large minorities, three at-large women, and the chair of the House of Delegates, currently Laurel G. Bellows of Chicago.

(Ironically, all three of this year’s candidates serve on the Nominating Committee, but they all recused themselves in accordance with rules that provide for alternates to fill in for them.)

Typically, it doesn’t take many ballots for the committee to choose its nominee. The greatest marathon in recent history occurred in 1991, when the committee held 88 ballots before nominating J. Michael McWilliams of Baltimore. He served as president in 1992-93.

There is an alternative to the Nominating Committee if a member wants to run for ABA president. The association’s constitution allows members to file petitions directly with the House of Delegates. But a candidate who goes that route is unlikely to get serious consideration, and the last time a petition was filed directly with the House was 1976, the year Wm. B. Spann Jr. of Atlanta was nominated to serve as president in 1977-78.