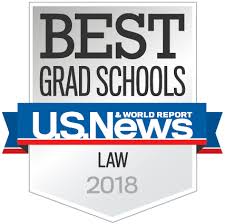 The rankings are here and a report by Law.com (sub. req.) is here.

University of California at Berkeley interim law dean Melissa Murray tells Law.com she believes the drop is an anomaly caused in part by small declines in areas such as the school’s employment rate and peer assessment figure. She notes that the school was “in the news for all the wrong reasons for much of the past year” because of sexual harassment allegations against former dean Sujit Choudhry, though there was no material effect on the academic program.

12) University of California at Berkeley

14) University of Texas at Austin

15) Georgetown University and University of California at Los Angeles (tie)