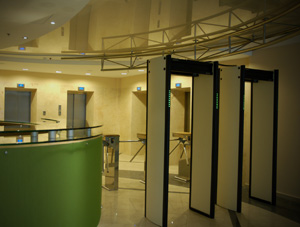 The chief judge of a Detroit court has issued an order barring a colleague from bringing weapons to work and requiring her to go through the courthouse metal detectors.

Judge Kahlilia Yvette Davis will have to go through the same security screening as courthouse employees and lawyers, 36th District Court Chief Judge Nancy Blount said in her order Friday. The Detroit News has coverage.

No reason was given for the order. State Court Administrator Milton Mack told the Detroit News he concurred with Blount’s decision “for everyone’s safety.”

Davis was elected in November 2016 and missed the first few months on the bench. The absence led to clashes with Blount, who told Fox 2 Detroit that she didn’t have a satisfactory statement from Davis’ doctor explaining why she was unable to work.

Davis currently fills in for other judges and maintains business license and commercial motor vehicle dockets, according to the Detroit News. Although she is apparently on the bench now, she was previously removed from hearing cases, Davis revealed in a lawsuit filed in November 2017.

Davis’ suit asked a higher court to take control of the 36th District Court and rescind the removal order. Davis had contended that Blount was punishing her for trying to uphold litigants’ rights in court, according to prior coverage by the Detroit News and CBS Detroit.

Davis’ 2017 suit said some proofs of service were being forged, violating litigants’ due process rights in landlord-tenant court. She ordered one process server jailed for contempt, but Blount released the process server.

Blount had said in 2017 that Davis’ suit was meritless. Mack, the state court administrator, had added that Blount was supporting standards that require competence and “a day’s work for a day’s pay.”

Previous coverage by Fox 2 Detroit said Davis had sought time off at the beginning of her term in January 2017 so she could take a trip to Germany. Blount denied the request. Then Davis told the judge that she had surgery and could not come to court.

According to the Fox 2 Detroit story, when asked why she wasn’t working, Davis said she had an open wound from the surgery, and she didn’t want to spread a “staph infection all over the courthouse.”

On days when Davis was absent, she had gone to Sam’s Club, the credit union and the gym, Fox 2 Detroit had reported.

Next:
Cartoon Caption: Brush up your best work of art for this courtroom scene