Submit your diorama for Peeps in Law 2016: Peep Wars 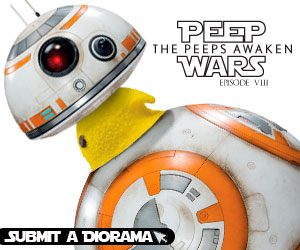 The spring awakens, which means it is time for 2016 Peeps in Law: Peep Wars.

It’s the eighth year for our Peeps in Law diorama contest. (When eight years your diorama contest reaches, look this good you will not.) When we first started this humble contest, you were all learners; now you are masters. There’s good in you; we’ve felt it.

A list of the complete contest rules can be found by clicking here. But here are the highlights: Create a law-related diorama with Peeps, take a photo of the diorama and send the photo (JPG, GIF or PNG) by 11:59 p.m. on Monday, March 21 to [email protected]. Include a title of the diorama, how you would like to be identified and a description of what the diorama represents. If you’d like to attach additional multimedia, go for it! In the past, some dioramas have had accompanying videos and original songs. Decisions to accept and post dioramas are solely up to ABA Journal staff.

Here is a photo gallery of 2015 entries to give you some inspiration. We have started displaying selected dioramas in a 2016 photo gallery as soon as enough come in, so if you want to build your fan base, don’t wait until the last minute! Submit those dioramas as soon as possible. And if you’re struggling for more inspiration, you can also check out the photo galleries below for six more years’ worth of previous entries.

After we have received all the submissions and gloated lovingly about how talented our readers are, voting begins! You will have from March 23 to March 31 to ponder which of our Peeps in Law dioramas deserves the grand prize and eternal glory, and we will announce the winners on April 1 (no fooling). The top three dioramas will receive bragging rights from the ABA Journal, and prove themselves truly worthy of the force.

Fine Print: By submitting a photo, you are acknowledging that you understand our Terms of Use and agree to allow the ABA Journal to reprint your photo and description in all forms of media at any time. Individual email addresses will not be posted. See the full contest rules here.

Do or do not. There is no try. 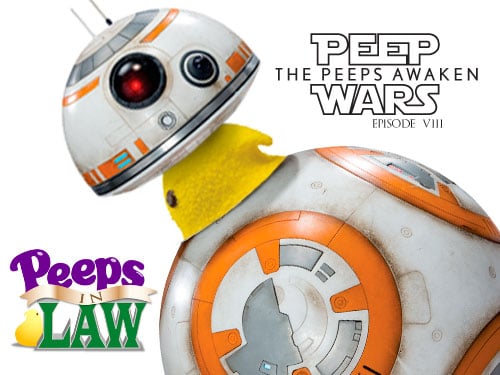 The spring awakens, which means it is time for 2016 Peeps in Law: Peep Wars.

It’s the eighth year for our Peeps in Law diorama contest. When we first started this humble contest, you were all learners; now you are masters. There’s good in you; we’ve felt it. Submissions are now closed, but click through to view our readers’ brilliant creations.