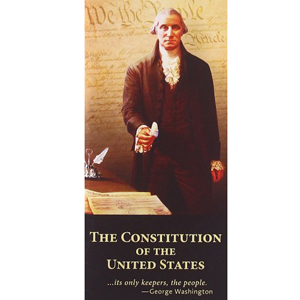 Pocket Constitutions have become a best-seller after a Muslim-American lawyer, Khizr Khan, waved his copy in the air during a speech at the Democratic National Convention.

A $1 pocket Constitution was Amazon’s second-best seller on Monday, the Washington Post reports. It was also among the website’s top 10 sellers on Saturday, according to ABC News.

For the budget minded, the American Civil Liberties Union is giving away copies through election day to those who use the coupon code “pocketrights.” But those who order them will need patience; orders will be delayed while the ACLU prints new copies “due to overwhelming support.”

In his convention speech, Khan talked about the death of his U.S. soldier son in Iraq and Donald Trump’s immigration stance, the New York Times reported in this story. The 27-year-old soldier, Capt. Humayun Khan, died while trying to stop a suicide bomber outside the gates to his base.

“If it was up to Donald Trump, he never would have been in America,” Khan said of his son.

Addressing Trump, Khan said, “Let me ask you: Have you even read the United States Constitution? I will gladly lend you my copy. In this document, look for the words liberty and equal protection of law.”

Khan’s pocket Constitution was published by the ABA’s Division for Public Education. He told the Post he orders boxes of the publications from the ABA to give to fourth-year cadets graduating from the University of Virginia’s ROTC program, the same program in which Khan’s son participated.

Khan worked at the law firm then known as Hogan & Hartson from 2000 to 2007, where he was the firm’s manager of litigation technology, Law.com reports. Lawyers from the firm who spoke with the publication described him as a great colleague who was devastated when his son died in 2004.

Updated on Aug. 2 to identify source of Khan’s pocket Constitution.