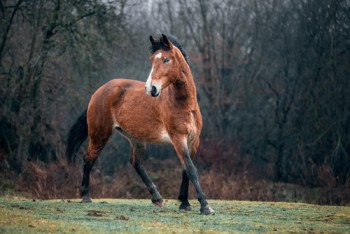 Inmates at the Northern Nevada Correctional Center are training wild horses in a “gentling” process that is also benefiting the inmates.

Hank Curry, the cowboy who runs the program, “had to kind of gentle me,” says inmate John Harris. He tells the New York Times he first took an aggressive approach when he trained the horses, but learned through experience that he had to take his time. According to the Times, gentling means to work with a wild horse until it responds to the commands of its trainer.

Twelve to 15 inmates volunteer to work in the program. Most of the inmates are nonviolent offenders serving two years or less in jail. Every four months, the gentled horses are auctioned to the public.

Says the Times: “Everyone involved in the program recognizes the symbolism: the way the horses and the inmates are both penned up and how through the training process they rehabilitate one another.”

There are similar programs at prisons in Arizona, Colorado, California, Kansas and Wyoming. The programs help the federal government manage the wild mustang population that is currently three times higher than what is considered a sustainable level.