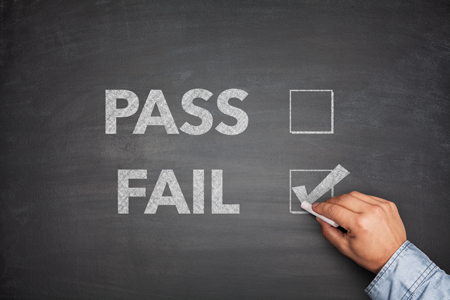 For the second time, the ABA House of Delegates voted against a proposal to tighten a bar passage rate standard for accredited law schools. At the ABA Midyear Meeting in Las Vegas on Monday, House members were asked to stand for a vote count, and the final vote was 88 in favor of the resolution, and 334 opposed.

Language in Resolution 105 called for at least 75 percent of a law school’s graduates to pass a bar exam within two years of graduation. Under ABA rules, the house can send a potential revision, which today was for Standard 316, back to the council of the Section of Legal Education and Admissions to the Bar twice for review with or without recommendations, but the council has the final decision on matters related to law school accreditation.

The council in November announced that it had filed paperwork for the proposed revision to again be considered by the House of Delegates. The group also released a memo addressing diversity concerns about the proposed revision, as well as what it would mean for law schools in California, where the cut score of 144 is the nation’s second highest. The memo mentioned a voluntary survey, which had responses from 92 law schools.

As was the case in 2017, when the House of Delegates first rejected the proposal, criticism has centered on what the change would mean for diversity in the profession. Two years ago, some groups called for disparate impact studies before going forward with any changes.

Paulette Brown, who as a former ABA president focused much of her term on promoting diversity and inclusion in the legal profession as well as eliminating bias and enhancing diversity, spoke against the resolution. She told the audience that it’s rare she speaks before the House, and she was doing so Monday because in her view, the council did not act on concerns raised by various organizations opposed to the proposed revision.

“I have listened very carefully to many of the arguments that have been advanced by the council, and to be direct and frank, they just don’t hold water,” said Brown, who served as ABA president in 2015-2016. She was the first black woman to lead the ABA.

“The council has the right to ignore what we say,” Brown said. “That does not absolve us of the responsibility to give them a very clear and strong message that we will not stand by while they decimate the diversity in the legal profession. They say that they have conducted data, but I submit to you that a questionnaire is not data. They should be held accountable just as they are claiming they want the law schools to be held accountable. So I urge you in the strongest possible way to have them go back to reject the standard.”

Brown is a senior partner at Locke Lord and serves as the firm’s chief diversity and inclusion officer.

“If you want to do a study, don’t call it a questionnaire. If you want the facts, bring the facts. But they have not. They have not delivered facts that are compelling for us to change our vote from the first time to the second time,” said Grey, a retired senior counsel with Hunton Andrews Kurth.

The resolution was introduced by Joan S. Howland, the associate dean for information and technology at the University of Minnesota. She previously served as chair of the council of the Section of Legal Education and Admissions to the Bar, and now serves as its delegate to the House.

Daniel Thies—a new member of the council who was nominated after a 2017 Young Lawyers Division request that the council add young lawyers with voting privileges—spoke in favor of the resolution.

Data from the New York bar exam shows that people of color do better when results are examined over two years, Thies said to the assembly, and there was no reason why the proposed revision would have a disproportionate impact. According to him, out of the 15 law schools that would have a problem meeting the two-year 75 percent requirement, based on 2015 data, only two are historically black colleges and universities. There are a total of six law schools associated with HBCUs, according to the resolution’s report.

“So those schools would only have to make small changes to their programs or admissions policies in order to comply. Like all regulated entities, the regulated will respond,” said Thies, an attorney with the Urbana, Illinois, firm Webber & Thies.

“I want to stress that even for those who might have problems, they don’t have their accreditation pulled tomorrow,” he said. “Give and take back and forth, and they get two years to come back into compliance. Many law schools have figured this out.”

After the resolution was voted down, Barry Currier, managing director for the ABA law school accreditation process, released a statement.

“Because this is the House’s second rejection of this proposal, the council’s options are to abandon the effort to revise the standard; propose a different revision; or reaffirm and implement the changes. The timetable for the council’s consideration of the matter has not been set,” Currier said. “The council understands this is a complex matter. Revisions to the existing standard on bar passage outcomes provide more straightforward and clear expectations for law schools and provide regulation and process that are more appropriate for today’s environment. Most students go to law school to become lawyers. Becoming a lawyer requires passing the bar exam. How well a school’s graduates perform on the bar exam is a very important accreditation tool to assess a law school’s program of legal education. The council appreciates the attention this proposal received by the House of Delegates and will consider a report on the concerns of the House of Delegates before making any final decision.”

Kyle McEntee, executive director of the Law School Transparency, told the ABA Journal in an email that he was disappointed the resolution did not pass.

“Standard 316 is good policy. I hope and expect the Section of Legal Education to adopt the standard in February. Then, finally, it can hold law schools accountable for failing to prepare its graduates for entry to the legal profession,” he wrote.

Lorelei Laird contributed to this reporting.