Rock star dreams come true for retired lawyer: 'It's been a wonderful ride'

Retired ABA employee Rick Vittenson finally has a record contract, more than 40 years after he and a friend formed their psychedelic folk rock band.

It turns out that the retro music style is making a comeback in Europe, so much so that a British label included one of the band’s songs (without their permission) on a compilation disc. Now Vittenson, a lawyer, and former band-mate Greg Herriges have a contract for the release of their remastered music with a different label. Their band is Athanor—named for a mythological place where wind and water create rain—and their new album is called “Flashback.”

“It’s been a wonderful ride,” Vittenson tells the ABA Journal, “a very improbable and wonderful ride.” The Chicago Sun-Times has a story on the band’s new-found success.

Guerssen Records released the vinyl version of “Flashback” this month in Europe and will release the U.S. version on April 2. A CD is also scheduled for release.

Vittenson, 63, says he was 22 years old when he and Herriges formed Athanor in the early 1970s. The two high school friends from suburban Chicago recorded music in Herriges’ home studio, releasing three singles. Herriges wrote all of the songs, save for one B side called “Memory (Don’t Fail Me).” Vittenson wrote that one.

“I was sort of the George Harrison of the band, trying to get one of my songs in,” Vittenson says.

The band got some local air play on minor radio stations, but their dreams of big success were unrealized. Athenor broke up in the mid-70s, though Vittenson and Herriges sometimes got together to play. In 2006, they recorded a new song together that is also on the album.

When the band broke up, “We thought that was the end of it and we went on with our lives,” Vittenson says. He went to Chicago-Kent College of Law, became a lawyer and worked for the ABA for more than 14 years. He held several positions at the association, heading the Center for CLE and serving as director of copyrights and contracts. Herriges is an English professor and published novelist. 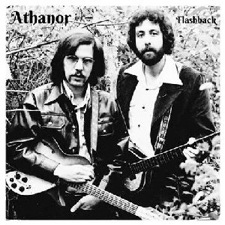 At the ABA, Vittenson played with a band called Malpractice that performed at office holiday parties. Several ABA Journal employees were also members. He retired in 2010—the same year that a British label found one of the band’s singles and put it on a compilation of 1970s psychedelic rock. Neither Herriges nor Vittenson were aware that their music was used on the British record, Vittenson says.

The liner notes mentioned Herriges’ name, and soon he started getting inquiries about his music from people in Europe. A music blogger in France named the Athenor single “Graveyard” his top song of the year. “Suddenly record companies came knocking,” Vittenson recalls.

Vittenson says he and Herriges are looking into the possibility of legal action against the British record company that used their song without their permission. But he’s happy that his life-long dream is finally coming true.

Would Vittenson have skipped law school if success had come earlier? “Who knows what path my life would have taken at that time?” Vittenson says. He recalls a comment by an ABA employee after a performance of the Malpractice band. “So you’re a lawyer pretending to be a rock star,” the staffer said.

“I said, ‘No you’ve got it entirely opposite,’ ” Vittenson says. “I’m a rock star pretending to be a lawyer.”

Updated at 2:52 p.m. to clarify that the first British label did not have permission to use their song in a compilation CD, and a different company is releasing their approved album.