Rudy Giuliani joins Trump's legal team along with 2 other lawyers 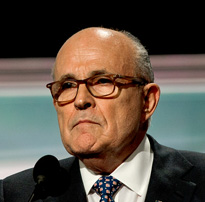 Rudy Giuliani says he has joined President Donald Trump’s legal team and is taking a leave of absence from Greenberg Traurig to handle the job.

Giuliani told the Washington Post why is joining the team dealing with the probe by special counsel Robert Mueller. “I’m doing it,” he said, “because I hope we can negotiate an end to this for the good of the country and because I have high regard for the president and for Bob Mueller.”

Giuliani served two terms as mayor of New York and is a former Manhattan U.S. Attorney. He told the Post he would work with Trump lawyers Jay Sekulow and Ty Cobb.