Sessions says Mueller hasn't interviewed him, declines to testify on his conversations with Trump 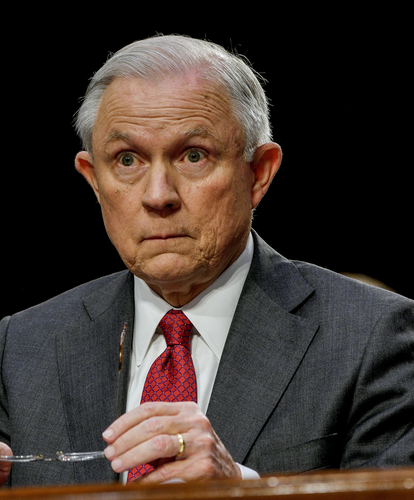 Attorney General Jeff Sessions declined to discuss his conversations with President Donald Trump about the May firing of FBI director James Comey or the investigation of Russian influence during a Senate Judiciary Committee hearing on Wednesday,

Sessions said in opening remarks that he couldn’t discuss the conversations, report the New York Times, the Washington Post, Politico and USA Today. He said the conversations were protected by executive privilege, which couldn’t be waived without the president’s consent.

“I would just urge us all to respect the legitimacy of any president’s right to seek advice in private. This is not a little matter,” Sessions said.

The Times reported that this angered Democrats, because Trump had not invoked the privilege. The Times and Post reported that nine Democrats on the Senate Judiciary Committee sent Sessions a letter (PDF) last week stating that Sessions needed to formally address over which topics Trump would invoke executive privilege and answer questions on all other topics.

Sessions did say he has not been interviewed by special counsel Robert Mueller, who is investigating Russian interference in the election and Comey’s firing. Sessions criticized Comey and indicated that he and Deputy Attorney General Rod Rosenstein had objected to his handling of the FBI investigation into Hillary Clinton’s use of a private email server.

“I don’t think it’s been fully understood the significance of the error Mr. Comey made on the Clinton matter,” Sessions said. Comey should have discussed the matter with the Justice Department before closing it, Sessions said.

Sessions said he didn’t know if it would be appropriate for Trump to issue a pre-emptive pardon to someone of interest in Mueller’s investigation before the probe is completed, according to the Times account.

“The pardon power is quite broad,” Sessions said in response to a question posed by a Democratic senator. “I’ve not studied it. I do not know if that would be appropriate or not.”

Sessions did say that Trump had asked him and Rosenstein to make a recommendation about Comey in writing. But he would not confirm or deny whether Trump had mentioned the Russian investigation when discussing Comey’s firing.

Rosenstein wrote the memo making the case for Comey’s firing because Sessions had recused himself from investigations arising out of the presidential campaign. He recused himself after revelations that he had twice met with Russian ambassador Sergey Kislyak last year. Sessions did not mention the contacts during his confirmation hearing in January.

The testimony on Wednesday was the first time Sessions appeared before the Senate Judiciary Committee since the confirmation hearing,

Sessions said Wednesday it was possible that some comment was made about Trump’s positions when he spoke with Kislyak, but he doesn’t think any details were discussed. When asked whether he had colluded with the Russian government, he emphatically replied “No,” according to the USA Today account.

Answering another Russia question, Session said the U.S. government is not doing enough to prevent Russian interference in future elections.

Sessions also defended Trump’s travel ban as an “important step” in the fight against terrorism, and expressed confidence that the ban would be upheld in the U.S. Supreme court.