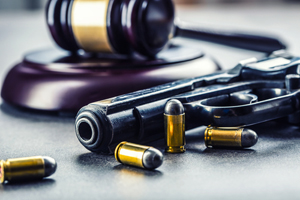 Lawyers representing a prominent Atlanta lawyer accused of murdering his wife during a ride home in an SUV said Monday they planned to ask potential jurors whether they believe people with more money are treated differently by the system.

Claud “Tex” McIver, a 75-year-old former partner at Fisher & Phillips, is represented by Bruce Harvey and Don Samuel in the trial that begins this week in Fulton County, Georgia, Law.com reports.

McIver maintains he accidentally shot his wife in September 2016 while holding a gun in his lap. McIver was sitting in the back seat and his wife, Diane, was in the passenger seat. McIver said he dozed off while holding the gun and woke up after the weapon fired several times.

Sixteen of 31 potential jurors were excused Monday, “many because they found McIver’s version of events difficult to swallow,” the Atlanta Journal-Constitution reports. One juror said the idea of an accidental shooting “just didn’t ring true.” Someone has to pull the trigger and guns “just don’t accidentally discharge,” the prospective juror said.

Jury selection continued to plod along Tuesday as 28 jurors in a second pool indicated they had some kind of prejudice against the lawyer, according to a new story by the Journal-Constitution. The problems led Judge Robert McBurney to hint at the possibility of a change of venue.

“Do we get a jury in Fulton County?” he asked.

McBurney made several evidence rulings favoring the prosecution as jury selection was about to get underway, according to this Journal-Constitution account.

Jurors will be able to hear about McIver’s decision not to call 911, but they won’t hear about his decision to bypass a closer hospital in favor of treatment at Emory Hospital.

Lawyers were also allowed to ask potential jurors about their support for Black Lives Matter. A spokesman for McIver had said after the shooting that McIver was holding the gun because he feared a protest by the group.

Jurors will also be able to hear testimony about Diane McIver’s second will even though the actual document has not been found. And they will be able to hear about an estate sale of McIver’s jewelry and clothing held a few months after she died.

On Monday, Harvey said that wine was being passed back and forth during the SUV ride, and alcohol would be a factor in the case. The lawyer also wanted to know if any jurors keep a gun in a car and if any of them have been present when a gun accidentally fired. He also wanted to ask whether any potential jurors were veterans; McIver served in Vietnam.