Should NCAA pay former college stars for using their images? 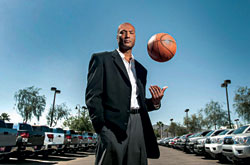 Ed O’Bannon was the star of UCLA’s basketball team in the mid-1990s. He led the team to the 1995 NCAA championship and was named the Final Four Most Outstanding Player. Replays of his classic games are often shown on sports networks.

Today, O’Bannon sells cars in Las Vegas. When his games air, he earns no royalties. He didn’t even know his likeness was used in a video game until a few years ago, when he was at a friend’s house and saw his friend’s son playing NCAA March Madness with an avatar that looked a lot like him.

“Initially I was excited. Who wouldn’t be excited if you saw your face on a video game? I grew up with video games, so I was pretty pumped,” O’Bannon says. “But after thinking about it, my feelings changed. … Something is wrong with this picture.”

Now O’Bannon is the lead plaintiff in a class action claiming college basketball and football players are illegally denied compensation for the use of their names, images and likenesses in video games, DVDs, reruns of games and other promotional materials. The lawsuit names the National Collegiate Athletic Association; the video game company EA Sports, based in Redwood City, Calif.; and the Collegiate Licensing Co., the Atlanta trademark licensing company, as defendants.

The suit, filed in July 2009 in the U.S. District Court for the Northern District of California, alleges antitrust violations based on the requirement that student athletes forgo the right to make a profit from licensing the use of their name, image or likeness. According to the suit, the NCAA imposes the requirement to preserve the amateurism of college sports.

But O’Bannon and the other plaintiffs argue that these rules should not apply once players’ college careers have ended, and that the “spirit of amateurism” is no longer at risk. The dispute centers on a waiver, Form 08-3a, that student-athletes sign at the beginning of their college careers. It grants the NCAA, or a third party representing the association, the right to use their names and pictures for promotions.

Continue reading “All Play and No Pay: Former college sports stars say NCAA owes them for their images” here.